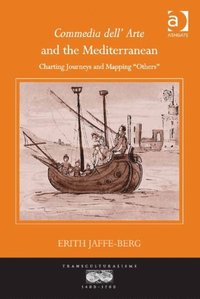 Charting Journeys and Mapping 'Others'

av Professor Erith Jaffe-Berg, Professor Ann Rosalind Jones, Professor Jyotsna Singh, Professor Mihoko Suzuki
E-bok (PDF - DRM), Engelska, 2015-09-28
1019
Ladda ned
Spara som favorit
Laddas ned direkt
Läs i vår app för iPhone, iPad och Android
Finns även som
Visa alla 4 format & utgåvor
Drawing on published collections and also manuscripts from Mantuan archives, Commedia dell' arte and the Mediterranean locates commedia dell' arte as a performance form reflective of its cultural crucible in the Mediterranean. The study provides a broad perspective on commedia dell arte as an expression of the various cultural, gender and language communities in Italy during the early-modern period, and explores the ways in which the art form offers a platform for reflection on power and cultural exchange.While highlighting the prevalence of Mediterranean crossings in the scenarios of commedia dell' arte, this book examines the way in which actors embodied characters from across the wider Mediterranean region. The presence of Mediterranean minority groups such as Arabs, Armenians, Jews and Turks within commedia dell' arte is marked on stage and 'backstage' where they were collaborators in the creative process. In addition, gendered performances by the first female actors participated in 'staging' the Mediterranean by using the female body as a canvas for cartographical imaginings.By focusing attention on the various communities involved in the making of theatre, a central preoccupation of the book is to question the dynamics of 'exchange' as it materialized within a spectrum inclusive of both cultural collaboration but also of taxation and coercion.
Visa hela texten