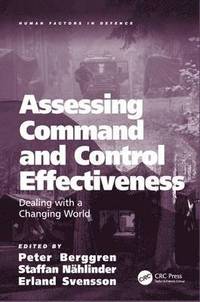 Dealing with a Changing World

av Peter Berggren, Staffan Nahlinder, Erland Svensson
Inbunden Engelska, 2014-06-28
1892
Köp
Spara som favorit
Finns även som
Visa alla 3 format & utgåvor
Assessing Command and Control Effectiveness: Dealing with a Changing World offers a description of the current state of Command and Control (C2) research in imperfect settings, showing how a research process should assess, analyse and communicate results to the development cycle of methods, work, manning and C2-technology. Special attention is given to the development of C2 research methods to meet the current and coming needs. The authors also look forward towards a future where effective assessment of C2 abilities are even more crucial, for instance in agile organisations. The purpose of the C2 research is to improve the process and make it more effective while still saving time and money. Research methods have to be chosen carefully to be effective and simple, yet provide results of high quality. The methodological concerns are a major consideration when working under such circumstances. Furthermore, there is often a need for a swift iterative development cycle, and thus a demand to quickly deliver results from the research process. This book explains how field research experimentation can be quick, simple and effective, being able to draw valid conclusions even when sample sizes are small and resources are limited, collecting empirical data using measures and procedures that are minimally intrusive.
Visa hela texten

'I enjoyed reading the book. The text gives a thorough and initiated review of current R&D accomplishments within the Swedish Military and Crisis Response domains. I find it refreshing that the human perspective is emphasized systematically by all authors. To me it is clear that we need to develop our methods, tools and technologies to meet future needs in command and control R&D. This publication will be a rich source for the education of officers and operators, and provide a solid basis for further scientific undertakings.' Major General Dennis Gyllensporre, Head of Policy & Plans Department, Swedish Armed Forces Headquarters