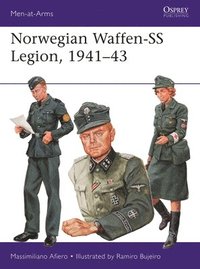 av Massimiliano Afiero
Häftad Engelska, 2019-03-21
128
Köp
Spara som favorit
Finns även som
Visa alla 2 format & utgåvor
Following the Nazi occupation of Norway in 1941, the Waffen-SS began recruiting volunteers to serve in their ranks. Initially formed into small volunteer units, these developed into large divisions by 1943, referred to as 'Legions' in Nazi propaganda. Early volunteers were promised that they would not leave Scandinavia and that they would serve under native Norwegian officers - but after the German invasion of the Soviet Union they were deployed to the Leningrad front alongside Dutch and Latvian units, in the 2nd SS Infantry Brigade. These units combined to form the nucleus of a whole regiment within the new 11th SS Volunteer Panzergrenadier Division 'Nordland'. Fully illustrated with detailed artwork depicting the uniforms and equipment of the volunteer soldiers, this fascinating study tells the little-known story of the Norwegians who fought with the SS in World War II.
Visa hela texten

Massimiliano Afiero was born in in Afragola (Naples Province) in 1964. An information technology teacher and programmer, he has been interested in military history since his youth, specializing in the history of Axis units during the Second World War and particularly in the Waffen-SS. He has published numerous articles in the principal Italian-language history magazines and has contributed to many military history websites and published numerous books dealing with foreign volunteers in the German armed forces during the Second World War. In December 2015, he began publication of the magazine, The European Volunteer (L'Assalto Edizioni), dedicated to the military history of Axis units during the Second World War and in January 2017, he began publication of the magazine The Axis Forces. He lives in Naples, Italy. Ramiro Bujeiro has become a frequent and popular contributor to Osprey since illustrating Warrior 23: US Marine in Vietnam (1998). He is an experienced commercial artist who lives and works in his native city of Buenos Aires, Argentina. His professional background includes many commissions as a figure illustrator and strip cartoonist for clients all over Europe and the Americas, including many years' work for IPC Magazines in Great Britain. His main interests are the political and military history of Europe in the first half of the 20th century.