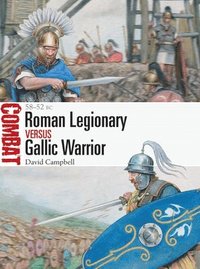 av David Campbell
Häftad Engelska, 2021-04-15
187
Köp
Spara som favorit
Finns även som
Visa alla 2 format & utgåvor
In the manner of many Roman generals, Caesar would write his domestic political ambitions in the blood and treasure of foreign lands. His governorship of Cisalpine Gaul gave him the opportunity to demonstrate the greatness of his character to the people of Rome through the subjugation of those outside Rome's borders. The fact that the main account of the subsequent wars in Gaul was written by Caesar himself - by far the most detailed history of the subject, with new reports issued annually for the eager audience at home -is no accident. The Roman Army of the late Republic had long been in the process of structural and change, moving towards the all-volunteer permanent standing force that would for centuries be the bulwark of the coming Empire. Well-armed and armoured, this professional army was trained to operate within self-supporting legions, with auxiliaries employed in roles the legions lacked such as light troops or cavalry. The Roman legions were in many ways a modern force, with formations designed around tactical goals and held together by discipline, training and common purpose. The armies fielded by the tribes of Gaul were for the most part lightly armed and armoured, with fine cavalry and a well-deserved reputation for ferocity. As might be expected from a region made up of different tribes with a range of needs and interests, there was no consensus on how to make war, though when large armies were gathered it was usually with the express purpose of bringing the enemy to heel in a pitched battle. For most Gauls - and certainly the military elites of the tribes - battle was an opportunity to prove their personal courage and skill, raising their status in the eyes of friends and foes alike. Fully illustrated, this study investigates the Roman and Gallic forces pitched into combat in three battles: Bibracte (58 BC), Sabis (57 BC) and Gergovia/Alesia (52 BC). Although charismatic Gallic leaders did rise up - notably Dumnorix of the Aedui and later Vercingetorix of the Arverni - and proved to be men capable of bringing together forces that had the prospect of checking Caesar's ambitions in the bloodiest of ways, it would not be enough. For Caesar his war against the Gauls provided him with enormous power and the springboard he needed to make Rome his own, though his many domestic enemies would ensure that he did not long enjoy his success.
Visa hela texten

David Campbell has worked as a freelance new media producer and content specialist for many years, including roles at IBM, the BBC, various internet consultancies and the civil service. He has a broad range of interests in literature and history, including the Middle Ages, the Napoleonic era, naval warfare and the genesis of the "Military Revolution." He lives in Hampshire, UK. Raffaele Ruggeri was born in Bologna where he works and lives with his wife. After studying at the Fine Arts Academy he worked in several areas of graphics and design before deciding to devote himself to illustration. He has long been interested in military history and has illustrated a number of books for Osprey.