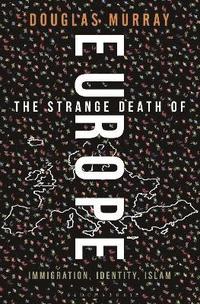 The Strange Death of Europe

av Douglas Murray
(14 röster)  |  Läs 3 recensioner
Inbunden Engelska, 2017-05-04
201
Köp
Spara som favorit
Finns även som
Visa alla 4 format & utgåvor
The Sunday Times number one bestseller The Strange Death of Europe is a highly personal account of a continent and culture caught in the act of suicide. Declining birth-rates, mass immigration and cultivated self-distrust and self-hatred have come together to make Europeans unable to argue for themselves and incapable of resisting their own comprehensive change as a society. This book is not only an analysis of demographic and political realities, but also an eyewitness account of a continent in self-destruct mode. It includes reporting from across the entire continent, from the places where migrants land to the places they end up, from the people who appear to welcome them in to the places which cannot accept them. Told from this first-hand perspective, and backed with impressive research and evidence, the book addresses the disappointing failure of multiculturalism, Angela Merkel's U-turn on migration, the lack of repatriation and the Western fixation on guilt. Murray travels to Berlin, Paris, Scandinavia, Lampedusa and Greece to uncover the malaise at the very heart of the European culture, and to hear the stories of those who have arrived in Europe from far away. In each chapter he also takes a step back to look at the bigger issues which lie behind a continent's death-wish, answering the question of why anyone, let alone an entire civilisation, would do this to themselves? He ends with two visions of Europe - one hopeful, one pessimistic - which paint a picture of Europe in crisis and offer a choice as to what, if anything, we can do next.
Visa hela texten

By far the most compelling political book of the year was Douglas Murray's The Strange Death of Europe ... fearless, truth-telling, and masterfully organised ... Don't hold an opinion about this book if you have not read it. * Evening Standard, Books of the Year 2017 * This is a brilliant, important and profoundly depressing book. That it is written with Douglas Murray's usual literary elegance and waspish humour does not make it any less depressing. That Murray will be vilified for it by the liberals who have created the appalling mess he describes does not make it any less brilliant and important ... Read it. * Rod Liddle, Sunday Times * His overall thesis, that a guilt-driven and exhausted Europe is playing fast and loose with its precious modern values by embracing migration on such a scale, is hard to refute. * Juliet Samuel, Telegraph * Every so often, something is published which slices through the fog of confusion, obfuscation and the sheer dishonesty of public debate to illuminate one key fact about the world. Such a work is Douglas Murray's tremendous and shattering book, The Strange Death of Europe. * Melanie Phillips, The Times * Breathtakingly gripping * Michael Gove, Standpoint * A cogent summary of how, over three decades or more, elites across western Europe turned a blind eye to the failures of integration and the rise of Islamism ... Persuasive * The Times * This is a vitally important book, the contents of which should be known to everyone who can influence the course of events, at this critical time in the history of Europe. * Sir Roger Scruton * Douglas Murray glitters in the gloom. His pessimism about multiculturalism is so well constructed and written it is almost uplifting. Liberals will want to rebut him. I should warn them that they will need to argue harder than they have ever argued before. * Nick Cohen * Douglas Murray's introduction to this already destructive subject of Islamist hegemony is a distinguished attempt to clarify the origins of a storm. I found myself continually wishing that he wasn't making himself quite so clear. * Clive James * Douglas Murray writes so well that when he is wrong he is dangerous * Matthew Parris, Spectator * Whether one agrees with him or not Murray has made a valuable contribution to the global battle of ideas * Amir Taheri, Asharq al-Awsat * Masterly * Christopher Hitchens on Bosie: A Biography of Lord Alfred Douglas * Powerful and engaging ... Murray is at his strongest when lampooning the neurotic guilt of Western liberal elites ... Disagree passionately if you will, but you won't regret reading it. * Literary Review * A compelling, insightful and persuasively argued narrative ... a deeply humane book that touches on individual tragedy ... It may even prove to be the start of a conversation, and for such a dangerously politicised and neglected subject, that would be most welcome. The combination of fascinating subject matter and superb writing make The Strange Death of Europe a title that stays in the mind throughout the reading process and beyond. * Entertainment Focus * Powerfully argued * Roland White, Sunday Times Political Books of the Year, 2017 * This is the most disturbing political book I've read this year. Based on travels through key European centres, Murray weaves a tale of uncontrolled immigration, failed multiculturalism, systemic self-doubt, cultural suicide and disingenuous political leadership. Accurate, insightful and devastating, with applicable lessons for countries on both sides of the Atlantic. * Rabbi Lord Jonathan Sacks * Please read Douglas Murray's The Strange Death of Europe * Morrissey *

Douglas Murray is Associate Editor of the Spectator and writes frequently for a variety of other publications, including the Sunday Times, Standpoint and the Wall Street Journal. He has also given talks at both the British and European Parliaments and the White House. He is the author of The Sunday Times bestseller The Madness of Crowds, as well as The War on the West: How to Prevail in the Age of Unreason.