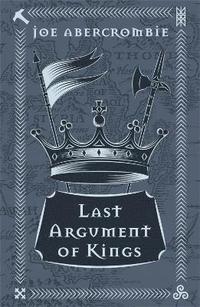 av Joe Abercrombie
(1 röst)
Inbunden Engelska, 2018-09-20
226
Köp
Spara som favorit
Finns även som
Visa alla 3 format & utgåvor
The end is coming. Logen Ninefingers might only have one more fight in him - but it's going to be a big one. Battle rages across the North, the King of the Northmen still stands firm, and there's only one man who can stop him. His oldest friend, and his oldest enemy. It's past time for the Bloody-Nine to come home. With too many masters and too little time, Superior Glokta is fighting a different kind of war. A secret struggle in which no-one is safe, and no-one can be trusted. His days with a sword are far behind him. It's a good thing blackmail, threats and torture still work well enough. Jezal dan Luthar has decided that winning glory is far too painful, and turned his back on soldiering for a simple life with the woman he loves. But love can be painful too, and glory has a nasty habit of creeping up on a man when he least expects it. While the King of the Union lies on his deathbead, the peasants revolt and the nobles scramble to steal his crown. No-one believes that the shadow of war is falling across the very heart of the Union. The First of the Magi has a plan to save the world, as he always does. But there are risks. There is no risk more terrible, after all, than to break the First Law...
Visa hela texten

Highly recommended - a funny, finely-wrought, terrifically energetic work of high fantasy. Seek it out -- Joe Hill LAST ARGUMENT OF KINGS signs off the trilogy on a high, interspersing breathless skirmishes with thriller-like moments. You should always end with the best. Wow them in the final act... get them on their feet applauding when the curtain falls. LAST ARGUMENT OF KINGS is the textbook example of this theory in practice * SFX * Breathtaking moments, great characters and grim laughs * DREAMWATCH * I might not end up marrying this book, but I'm certainly infatuated with it right at the moment. It's delicious, the characters sharply drawn and their motivations believable, the clash of cultures (always particularly difficult for an author to pull off) believable as well. -- Lilith Saintcrow There is a gritty edge to his world and an awareness of the human cost of violence that is very contemporary -- The Times Delightfully twisted and evil -- The Guardian The Blade Itself is a page-turner powered by a combination of fast-paced action and juicy doses of cynicism. Perhaps more remarkable, however, is the way Abercrombie sets the scene -- Edge Magazine There's a fat vein of cynicism and dark humour throughout. The action scenes are fast-paced and the violence takes its toll both mentally and physically. A great start to a long journey' -- Dreamwatch You'd never guess that The Blade Itself is Joe Abercrombie's debut novel. He writes like a natural. There are great characters, sparky dialogue, an action-packed plot, and from the very first words and an opening scene that is literally a cliff-hanger, you know you are in for a cheeky, vivid, exhilarating ride -- Starburst An admirably hard, fast and unpretentious read from debut author Joe Abercrombie. Packs a mean punch in the bloodthirsty mayhem and mystery departments. Crammed full of torture, vengeance and bad behaviour, it's a lively tale of savagery vs. civilisation. The Blade Itself may not reinvent the wheel, but it does serve up a whole banquet of violent action and intrigue' -- SFX The star of the show is doubtlessly Inquisitor Glotka for simply being one of the most wonderfully bitter and cynical characters I've come across. With a very funny and clever internal monologue going on during every conversation he has, Glotka's as miserable and nasty at the end as he was to start with and, especially in a heroic fantasy novel, it works perfectly -- SF Crowsnest