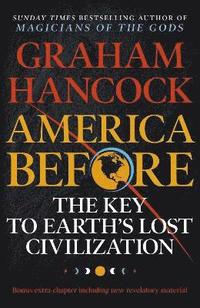 America Before: The Key to Earth's Lost Civilization

A new investigation into the ancient apocalypse

av Graham Hancock
Häftad Engelska, 2020-09-29
166
Köp
Spara som favorit
Finns även som
Visa alla 1 format & utgåvor
***THE SUNDAY TIMES TOP TEN BESTSELLER*** 'Hancock's books provide a fascinating, alternative version of prehistory. America Before, detailed and wide-ranging, turns what was myth and legend into a new story of the past.' Daily Mail Was an advanced civilization lost to history in the global cataclysm that ended the last Ice Age? Graham Hancock, the internationally bestselling author and television presenter, has made it his life's work to find out -- and in America Before, he draws on the latest archaeological and DNA evidence to bring his quest to a stunning conclusion. We've been taught that North and South America were empty of humans until around 13,000 years ago - amongst the last great landmasses on earth to have been settled by our ancestors. But new discoveries have radically reshaped this long-established picture and we know now that the Americas were first peopled more than 130,000 years ago - many tens of thousands of years before human settlements became established elsewhere. Hancock's research takes us on a series of journeys and encounters with the scientists responsible for the recent extraordinary breakthroughs. In the process, from the Mississippi Valley to the Amazon rainforest, he reveals that ancient 'New World' cultures share a legacy of advanced scientific knowledge and sophisticated spiritual beliefs with supposedly unconnected 'Old World' cultures. Have archaeologists focussed for too long only on the 'Old World' in their search for the origins of civilization while failing to consider the revolutionary possibility that those origins might in fact be found in the 'New World'? America Before: The Key to Earth's Lost Civilisation is the culmination of everything that millions of readers have loved in Hancock's body of work over the past decades, namely a mind-dilating exploration of the mysteries of the past, amazing archaeological discoveries and profound implications for how we lead our lives today.
Visa hela texten

Hancock's books provide a fascinating, alternative version of prehistory. America Before, detailed and wide-ranging, turns what was myth and legend into a new story of the past. * Daily Mail * Praise for Graham Hancock * : * A great yarn... [Hancock] is a writer with a first-rate feel for colour and ambience. * The Sunday Times * Hancock's book is an absorbing big-picture analysis as well as a cautionary tale. * Nexus *

As East Africa correspondent of The Economist in the early eighties Graham Hancock began to write a series of highly acclaimed books on economics, politics and foreign aid. His life took a whole new turn when he became fascinated by rumours that the Ark of the Covenant is real artefact, hidden somewhere in northern Africa. The story of his detective work, tracking it down to its supposed final resting place became the international bestseller The Sign and the Seal (now in production as a feature film.) More bestsellers in the field of 'alternative history' followed, including Fingerprints of the Gods, Keeper of Genesis (the latter co-authored with Robert Bauval) and Heaven's Mirror. In Supernatural he described his experiences journeying to experiment with hallucinogenic drugs amongst tribes people for whom they represent a gateway into supernatural realms. His ideas on exploring new dimensions in consciousness became the subject of his controversial TED talks. Graham Hancock's books have been translated into twenty-seven languages and have sold over nine million copies worldwide. His public lectures and broadcasts, including two major TV series for Channel 4, Quest for the Lost Civilisation, and Flooded Kingdoms of the Ice Age, have further established his reputation as an unconventional thinker who raises controversial questions about humanity`s past.