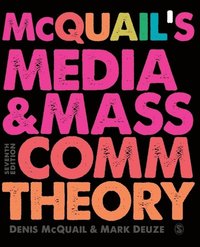 
"This informative, important and readable volume should populate the shelves of all those wanting to understand more fully how the media and mass communication operate today." -Professor Barbie Zelizer,Annenberg School for Communication

Now in its seventh edition, this landmark text continues to define the field of media and mass communication theory and research. It is a uniquely comprehensive and balanced guide to the world of pervasive, ubiquitous, mobile, social and always-online media that we live in today.

New to this edition:

This book is the benchmark for studyingmedia and mass communication in the 21st century.
Visa hela texten

"What a magnificent invitation to the field of media and communication - full of lively debate and relevant examples yet carefully balanced, comprehensive in scope and thoughtfully explained.“

This informative, important and readable volume should populate the shelves of those wanting to understand more fully how the media and mass communication operate today. Continuing where McQuail’s legendary volumes on mass communication theory ended, Deuze pays him tribute while offering another chance to engage with its debates in real time.

We should be grateful Mark Deuze took on the task of bringing Denis McQuail’s book up to date. The result is one of the best introductions communication and media studies has ever had.

Mark Deuze is Professor of Media Studies at the University of Amsterdams (UvA) Faculty of Humanities. From 2004 to 2013 he worked at Indiana Universitys Department of Telecommunications in Bloomington, United States. Publications of his work include over ninety papers in academic journals and books, including most recently Making Media (January 2019; co-edited with Mirjam Prenger, published by Amsterdam University Press), and Beyond Journalism (December 2019; co-authored with Tamara Witschge, published by Polity Press).

Deuzes work has been translated in Chinese, Czech, German, Portuguese, Greek, and Hungarian. He holds a honorary appointment as a Visiting Professor at the University of Technology Sydney (2019-2020), has received a Donald W. Reynolds Fellowship from the Missouri School of Journalism (2015), a visiting Research Fellowship at the Center for International Communications Research of Leeds University (2007), and a Fulbright Fellowship at the University of Southern California in Los Angeles (2003).