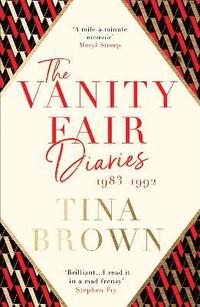 From the author of the Sunday Times bestseller THE PALACE PAPERS

av Tina Brown
Häftad Engelska, 2018-06-28
160
Köp
Spara som favorit
Finns även som
Visa alla 1 format & utgåvor
'Indiscreet, brilliantly observed, frequently hilarious' Evening Standard 'Hang on - it's a wild ride' Meryl Streep It's 1983. A young Englishwoman arrives in Manhattan on a mission. Summoned in the hope that she can save Conde Nast's troubled new flagship Vanity Fair, Tina Brown is plunged into the maelstrom of competitive New York media. She survives the politics and the intrigue by a simple stratagem: succeeding. Here are the inside stories of the scoops and covers that sold millions: the Reagan kiss, the meltdown of Princess Diana's marriage to Prince Charles, the sensational Annie Leibovitz cover of a gloriously pregnant, naked Demi Moore. Written with dash and verve, the diary is also a sharply observed account of New York and London society. In its cinematic pages the drama, comedy and struggle of raising a family and running an 'it' magazine come to life.
Visa hela texten

A mile-a-minute memoir I read like a parrot with my nails embedded in Pirate Tina's shoulder, yelling 'What??!!' 'What!?!!' 'WOWZA!' as she swashbuckles through the eighties, her sword slicing up the staid shibboleths of New York. I remembered why I was afraid of her in those days. And why that energy and imagination, turned to making the world better, has galvanized so many of us now. A cultural catalyst, she makes things happen. Thank god she wrote it all down. Hang on - it's a wild ride -- Meryl Streep It's brilliant, concretely realised social history as much as a fabulous odyssey, and I read it in a mad frenzy -- Stephen Fry Full of creative glee, passion and wild-ride excitement, The Vanity Fair Diaries features a cast of characters like Mad Men (and women) on speed; an epic of a legendary magazine's dazzling re-creation; moments of laugh-out-loud comic asides, juicy gossip and sketches of Austen-like sharpness, all put together by an editor of high-octane genius who pauses only to reflect that however good she might be, it's never quite good enough. Oh yes it is. Read the diaries and feel better about everything. The word lives! -- Simon Schama There has been fevered speculation about Tina Brown's diaries for decades ... Well, here they finally are - and I read them in one six-hour sprint of pure pleasure and joy. These are the most compelling media diaries since Piers Morgan's The Insider but with a tonier cast of characters, indiscreet, brilliantly observed, frequently hilarious ... Her turnaround of the relaunched Vanity Fair in the mid-Eighties is the stuff of journalistic legend - an electrifying, glitzy, gritty triumph - and these are the years covered by these diaries. And it's all here: the Demi Moore naked and pregnant front cover, Claus von Bulow photographed in black leather, Donald and Ivana Trump, the whole sweep of Eighties Manhattan reported at first hand in Tina's fresh, beady, borderline-paranoid style ... As a primer for how to edit a hot magazine, there is much to learn here ... Tina encounters it all, and deals with it -- Nicholas Coleridge * EVENING STANDARD * Who could resist Tina Brown, that then 30-year-old blonde Brit who stormed New York in the Eighties, reading her memoir of how she did it? Not me ... Her voice is taut, her eye is everywhere. She doesn't bring us into her circle but tells us, firmly, proudly, sometimes wickedly, what it was like ... Listening to her is as delightful as eating a whole box of chocolates, without a trace of weight gain ... She's irresistible -- Gillian Reynolds * DAILY TELEGRAPH * High, low, smart, sexy, Tina Brown's The Vanity Fair Diaries is like the magazine she reinvented, a must-read for anyone interested in Hollywood, high society, and the movers and shakers of pop culture -- Anderson Cooper The party-by-party, cover-by-cover story of how a Brit conquered New York publishing. As a novice editor, I can tell you it is packed with priceless advice from one of the greatest of them all -- George Osborne * NEW STATESMAN </i>Books of the Year<i></i> * Right there. That's what makes Brown such a fabulous diarist. It's not just that she's a wonderful writer (although she is: fluent, funny, fierce). It's more that, even after taking her seat at America's top table, she never stops noticing. Amid the narcotic stupefaction of great wealth, Brown is invariably alert and on the money -- Allison Pearson * SUNDAY TELEGRAPH * Because you can never have too many books - and this one will be the juiciest of the year * COSMOPOLITAN * [A] terrifying, breakneck, hothouse, backstage tour of how magazines, news and views, and reputations are made and destroyed. [It] made me crave an anti-anxiety pill! In [my] next life I will definitely be a snail -- @MargaretAtwood (Twitter) Brown is brilliant at these gleeful little character descriptions ... She has the knack of making people instantly interesting ... [The Vanity Fair Diaries] make for a fast-paced and hea

Tina Brown is an award-winning writer and editor and the founder of the Women in the World summits. Between 1979 and 2001 she was editor successively of Tatler, Vanity Fair and The New Yorker. She is the author of the 2007 bestselling biography of the Princess of Wales, The Diana Chronicles. In 2008 Brown founded The Daily Beast, and in 2014 launched Tina Brown Live Media to expand Women in the World internationally. She is married to editor, publisher and historian Sir Harold Evans and lives in New York City.