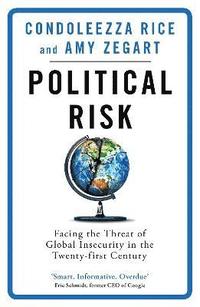 Facing the Threat of Global Insecurity in the Twenty-First Century

av Condoleezza Rice, Amy Zegart
Häftad Engelska, 2019-05-16
111
Köp
Spara som favorit
Finns även som
Visa alla 1 format & utgåvor
'Smart. Informative. Overdue' Eric Schmidt, former CEO of Google Political risk - the probability that a political action could significantly affect an organisation - is changing fast, and it's more widespread than ever before. In the past, the chief concern used to be whether a foreign dictator would nationalise the country's oil industry. Today, political risk stems from a widening array of agents, from Twitter users and terrorists to hackers and insurgents. What's more, the very institutions and laws that are supposed to reduce uncertainty and risk often increase it instead. This means that in today's globalised world there are no 'safe' bets. Political risk affects companies and organisations of all sizes, operating everywhere from London to Lahore, even if they don't know it. Political Risk investigates and analyses this shifting landscape, suggests what businesses can do to navigate it, and explains how all of us can better understand these rapidly changing geopolitical dynamics.
Visa hela texten

'Rice and Zegart's Political Risk should be read by every business leader. Well-written and chock-full of compelling case stories wrapped inside a coherent conceptual framework, Political Risk gets and keeps your attention, page after page. We cannot predict the future, but - with the help of this marvellous masterwork - we can prepare for it' -- Jim Collins, author of <i>Good to Great</i> and co-author of <i>Great by Choice</i> and <i>Built to Last</i> 'Smart. Informative. Overdue. Will completely change the way you think about political risk' -- Eric Schmidt, former CEO of Google and Alphabet, Inc. 'This book is truly excellent, both for tracing how far the political risk field has come in the last two decades, and how much further it has left to go' -- Ian Bremmer, president, Eurasia Group Clearly written and timely, this book will interest not only current and future business executives but also would-be-whistle-blowers and corporate watchdogs * Publishers Weekly * 'Secretary Rice and Dr Zegart have melded their professional experiences of managing political risk at the highest levels with other case studies into a uniquely useful and profound book' -- Frederick W. Smith, chairman & CEO, FedEx Corporation

Condoleezza Rice is the current Denning Professor in Global Business and the Economy at the Stanford Graduate School of Business and a professor of Political Science at Stanford University. Rice was the second woman and first African American woman to serve as U.S. Secretary of State and the first woman to serve as National Security Advisor under President George W. Bush. Amy Zegart is the founder of Stanford University's Cyber Policy Program, the co-Director of Stanford's Center for International Security and Cooperation, and the Davies Family Senior Fellow at the Hoover Institution. She is a contributing editor at The Atlantic, and her commentary has been featured in the New York Times, Wall Street Journal, Washington Post, Los Angeles Times, and elsewhere. Zegart is an expert in intelligence, cybersecurity and geopolitics, and a sought-after advisor to both government and business executives on each. Her award-winning books include Flawed by Design: The Evolution of the CIA, JCS, and NSC, and Spying Blind: The CIA, the FBI, and the Origins of 9/11.