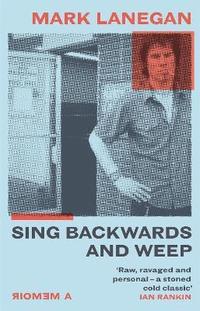 av Mark Lanegan
Inbunden Engelska, 2020-04-30
207
Köp
Spara som favorit
Finns även som
Visa alla 2 format & utgåvor
THE SUNDAY TIMES BESTSELLER "Mark Lanegan-primitive, brutal, and apocalyptic. What's not to love?" Nick Cave "A stoned cold classic" Ian Rankin "Powerfully written and brutally, frighteningly honest" Lucinda Williams From the back of the van to the front of the bar, from the hotel room to the emergency room, onstage, backstage, and everywhere in between, Sing Backwards and Weep reveals the abrasive reality beneath one of the most romanticized decades in rock history-from a survivor who lived to tell the tale. When Mark Lanegan first arrived in Seattle in the mid-1980s, he was just "an arrogant, self-loathing redneck waster seeking transformation through rock 'n' roll." Within less than a decade, he would rise to fame as the front man of the Screaming Trees, then fall from grace as a low-level crack dealer and a homeless heroin addict, all the while watching some of his closest friends rocket to the pinnacle of popular music. In Sing Backwards and Weep, Lanegan takes readers back to the sinister, needle-ridden streets of Seattle, to an alternative music scene that was simultaneously bursting with creativity and saturated with drugs. He tracks the tumultuous rise and fall of the Screaming Trees, from a brawling, acid-rock bar band to world-famous festival favourites with an enduring legacy that still resonates. Lanegan's personal struggles with addiction, culminating in homelessness, petty crime, and the tragic deaths of his closest friends, is documented with a painful honesty and pathos. Gritty, gripping, and unflinchingly raw, Sing Backwards and Weep is a book about more than just an extraordinary singer who watched his dreams catch fire and incinerate the ground beneath his feet. Instead, it's about a man who learned how to drag himself from the wreckage, dust off the ashes, and keep living and creating.
Visa hela texten

Raw, ravaged and personal - a stoned cold classic -- Ian Rankin Sing Backwards and Weep is powerfully written and brutally, frighteningly honest. First thought that came to my mind was, 'Mark Lanegan gives the term 'bad boy' a whole new meaning.' These are gritty, wild tales of hardcore drugs, sex, and grunge. But this is also the story of a soulful artist who refused the darkness when it tried to swallow him whole. And who found redemption through grace and the power of his unique and brilliant music. Finally, the song becomes truth. And the truth becomes song -- Lucinda Williams A mesmerising trip to the dark side that in places is so gloriously bleak it achieves a kind of Grand Guignol comedy. Written in blood, with true intensity, it becomes an instant classic of the genre -- Kevin Barry A dark tale of dysfunctional normality and diseased reality. At war with the world and himself, Mark Lanegan writes like he sings, from the pained heart of a damaged soul with brutal honesty -- Bobby Gillespie One of the rawest and most honest music autobiographies I've ever read -- Stuart Braithwaite The frontman of the Screaming Trees gives a bloody, brawling, dope-fueled tour of his personal battlefields By any reckoning, Lanegan should be long dead alongside beloved friends like Kurt Cobain of Nirvana, Kristen Pfaff of Hole, and Layne Stanley of Alice in Chains. By either miracle or stamina, the author is still alive to offer a blisteringly raw self-portrait of life not just as an excessively self-indulgent rock star, but also a victim of his own hubris . . . This isn't just a warts-and-all admission; it's a blackout- and overdose-rich confessional marked by guilt and shame. It's also not a redemption song, but like any other train wreck, it's impossible to look away. A stunning tally of the sacrifices that sex, drugs, and rock 'n' roll demand of its mortal instruments * Kirkus * Many rock memoirs come with a third act in which the artist achieves sobriety and disavows their former life. Not so Lanegan, who delivers grand guignol scenes of heroin-fuelled violence, degradation and self-abuse while recalling his Screaming Tree days, with little in the way of regrets. Rare in its rawness and bracing honesty. * The Guardian, 10 of the Best Music Biographies * The most brutally honest rock memoir imaginable -- Daily Telegraph Not for the faint-hearted -- 9/10, Classic Rock An astonishingly frank, heartbreaking and tremendously brave book -- Record Collector Dark yet borderline-hilarious cavalcade of horror and mayhem -- Big Issue The book reads like a debauched Bukowski novel, as Lanegan drifts from sin to sin, cursing those who held him back from music, drugs, and hookups, and recounting grisly tales about his famous friends -- Rolling Stone This is a frank, astonishing and often horrifying recollection from someone who has certainly lived a life, and who has now decided to share a part of it . . . far from your usual Rockstar Memoir -- Si Forster * Echoes and Dust * One of the most unflinching memoirs in the history of music writing . . . it is a survivor's tale, and a brilliantly written one at that * Kerrang * [Sing Backwards and Weep] makes for a harrowing epic, a thriller if I ever read one . . . the lyricist's flair he applies to its best passages elevates the book from the level of hachneyed retreads . . . he's able to dial himself up in moments of rage, sink us chin-deep into his sorrow at the loss of good friends . . . and crank the tension into a tightly wound ball when the dope-sickness sets in and the chase for a fix is on * Bookanista * A harrowing but often hilarious chronicle of addiction and regret . . . packed full of surprises . . . [Lanegan's] eye-popping memoir explores hell's many sub-basements, and lived to produce good writing -- Kitty Empire * Guardian * Rare in its rawness and candour, the book is a brutal chronicle of addiction -- Fiona Sturges * Guardian * [A] deeply sensitive book -- Guardian A brutally honest,

Mark Lanegan's singular body of work encompasses dozens of albums both solo and collaborative and his memoir Sing Backwards and Weep was a Sunday Times bestseller and Rough Trade Book of the Year. He died aged 56 in 2022.