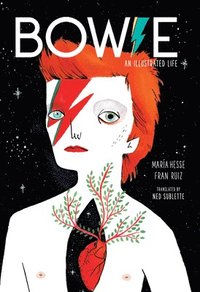 Ladda ned
Spara som favorit
Ladda ned och läs i en e-boksläsare. Tips på appar
';An entertaining and informative glimpse of Bowie's public and private life, music and disappearance from this earth.' Shelf Media Group David Bowie was a master of artifice and reinvention. In that same spirit, illustrator Mara Hesse and writer Fran Ruiz have created a vivid retelling of the life of David Robert Jones, from his working-class childhood to glam rock success to superstardom, concluding with the final recording sessions after his cancer diagnosis. Narrated from the rock star's point of view, Bowie colorfully renders both the personal and the professional turning points in a life marked by evolution and innovation. We see Bowie facing the sorrow of his brother's mental illness, kicking a cocaine habit while other musicians succumbed to deadly overdoses, contending with a tumultuous love life, and radiating joy as a father. Along the way, he describes how he shattered the boundaries of song and society with a counterculture cast that included Iggy Pop, Brian Eno, and Freddie Mercury, as well as his own creations, Ziggy Stardust and the Thin White Duke. Evocatively illustrated from start to finish, Bowie is a stellar tribute to an inimitable star. ';While Bowie portrayed many larger-than-life characters in his music, this book attempts to turn Bowie himself into a similarly superhuman character, adding a few extra dashes of magic, wonder and awe into his already stunning life as an artist.' Paste ';Beautifully illustrated... Not a ';graphic biography' but something more imaginative.' Shepherd Express ';The art reflects a man consumed with himself as an evolving art project, at once self-absorbed and self-sacrificing, cooly aesthetic and curiously, lovably human.' Publishers Weekly
Visa hela texten