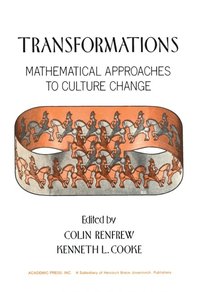 av Colin Renfrew, Kenneth L Cooke
E-bok (PDF - DRM), Engelska, 2014-05-10
859
Ladda ned
Spara som favorit
Laddas ned direkt
Läs i vår app för iPhone, iPad och Android
Transformations: Mathematical Approaches to Culture Change focuses on the application of contemporary mathematical techniques to the study of culture change and formulates problems in archaeology, anthropology, and historiography in such a way that they are susceptible to treatment of a mathematical kind. Mathematical models, extending from the almost purely quantitative methods of physics to the purely verbal conceptual explanations, are described. Emphasis is placed on catastrophe theoretic models that exemplify the use of soft mathematics in situations in which the use of hard quantitative models is not possible.Comprised of 21 chapters, this book begins with an overview of the role of mathematics in theoretical archaeology, followed by a discussion on two general categories of mathematical methods that seem to be suitable for modeling cultural transformations: methods of dynamical systems theory and methods that give greater emphasis on discrete entities and the structural relations or patterns among them. Subsequent chapters deal with the use of mathematics in history; morphogenesis in biological and social systems; simulation of the growth of hierarchies; and logistic trends in Southwest population growth. A reconstruction of political units in the Valley of Mexico during the Toltec period is also presented.This monograph will be of interest to archaeologists, anthropologists, historians, biologists, sociologists, and mathematicians.
Visa hela texten