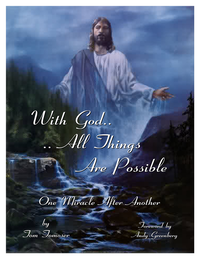 With God All Things Are Possible E-bok

av Tom Tomoser, Andy Greenberg
E-bok (EPUB - DRM), Engelska, 2016-10-28
64
Ladda ned
Spara som favorit
Laddas ned direkt
Läs i vår app för iPhone och iPad
&quoteWith God All Things Are Possible&quote is a testament to the truth of Matthew 19-26. Being guided by the Holy Spirit Tom was able to use the superb memory that was given him by Almighty God to specifically recall and articulate the amazing and wonderful experiences God allowed him to partake of both before he was a believer and after he was a believer. Going back to the early days of WWII Tom calls up names of people and places that were part of significant events in Tom's life over 70 years ago. He describes with accuracy how he planned, engineered, and executed an escape from the supervision of 4 adult women at a nursery school, the predecessor to day care. Read the whole adventure in Chapter 2. A High School drop out who left school at age 17 to make it on his own driven constantly by the independent spirit found on both side of his family heritage. An 11th generation American on his mother's side through the Chapin Family. Deacon Samuel Chapin was a Puritan and a Nobleman who fled England with his family in 1623 to escape religious persecution. The Chapin family has had many Chapin men fight in many wars to defend America, and keep religious liberty a stalwart of this great nation. Tom is a 2nd generation American on his father Herbert Tomoser's side. The Tomoser's left Hungary in the late 1890's to find the American dream. The Tomoser's also sent many men to defend America in the wars of the 20th and 21st century. Tom's life after his Navy enlistment and his subsequent employment in the meat packing industry, provided the venue and opportunity for this young man, to surpass any and all limitations anyone thought they could put on him. Back in 1943 no one recognized or paid attention to a 4 year old's ability to recognize, analyze, and seize opportunity when it presented it self. However having worked hard and tirelessly in the family business of building servo actuators for radio controlled model airplanes back in 1951, young Tom realized he very much enjoyed producing products in large quantity. The meat packing industry provided lots of opportunity to produce products other than retail cuts of beef. The by product market was a higher profit margin business. In the middle 60s Tom found a throw away product that would be the product that would allow him to build a multi million dollar business. So what Tom started to do in the 40s, recognize, analyze, and seize became part of his make up in his daily walk in the 60s to find what he needed to build a multi million dollar business. In 1976 Tom was converted to Christianity, accepted Christ as his personal Savior and was Baptized into The Church Of Jesus Christ Of Latter Day Saints. It was at this time that he realized that God had always been with him and watched over him and saved him from death 7 times. It was a huge awakening to recognize God's hand in everything that is and everything that was. Doors began to open and opportunities presented themselves. Tom counseled with the Lord in Prayer over every decision to make sure now that he found the Lord that he could learn the ways of the Lord and bask in life giving rays of the Gospel Of Jesus Christ. Watch, how step by step the Lord Blessed Tom to build a business that would thrive and provide opportunities for many to improve their lot in life. It wasn't all smooth sailing and there were set backs. You are cordially invited to experience the &quoteVirtual Reality On The Pages &quoteas Andy Greenberg described the narrative style of this intriguing book, of course Tom saved the best for last so you will have to read on to feel the heart warming ending.
Visa hela texten