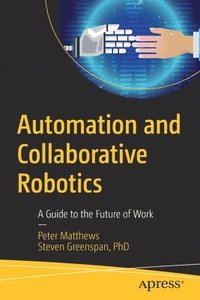 A Guide to the Future of Work

av Peter Matthews, Steven Greenspan
Häftad Engelska, 2020-07-01
438
Köp
Spara som favorit
Kan levereras innan julafton!
Finns även som
Visa alla 1 format & utgåvor
Understand the current and future research into technologies that underpin the increasing capabilities of automation technologies and their impact on the working world of the future. Rapid advances in automation and robotics technologies are often reported in the trade and general media, often relying on scary headlines such as "Jobs Lost to Robots." It is certainly true that work will change with the advent of smarter and faster automated workers; however, the scope and scale of the changes is still unknown. Automation may seem to be here already, but we are only at the early stages. Automation and Collaborative Robotics explores the output of current research projects that are improving the building blocks of an automated world. Research into collaborative robotics (cobotics) is merging digital, audio, and visual data to generate a commonly held view between cobots and their human collaborators. Low-power machine learning at the edge of the network can deliver decision making on cobots or to their manipulations. Topics covered in this book include: Robotic process automation, chatbots, and their impact in the near future The hype of automation and headlines leading to concerns over the future of work Component technologies that are still in the research labs Foundational technologies and collaboration that will enable many tasks to be automated with human workers being re-skilled and displaced rather than replaced What You Will Learn Be aware of the technologies currently being researched to improve or deliver automation Understand the impact of robotics, other automation technologies, and the impact of AI on automation Get an idea of how far we are from implementation of an automated future Know what work will look like in the future with the deployment of these technologies Who This Book Is For Technical and business managers interested in the future of automation and robotics, and the impact it will have on their organizations, customers, and the business world in general
Visa hela texten

Peter Matthews, based in the UK, is a writer and research scientist. Peter has more than 40 years of IT experience ranging from mainframe/Unix programming, development and relational databases to secure cloud computing, DevOps and cobotics. Peter's research work has been concerned with leading edge technology for a major proportion of that time. Projects have included machine learning algorithms for soccer clubs, multi-level secure database systems and object-oriented application infrastructures. He has also led groups investigating the influence of macro social, political and economic trends on future technology. Peter's current research is focused on automation and robotics. Past research has covered Internet of Things, cloud computing, data curation, smart buildings and cobotics. Peter has been the CA project lead on cobotics under the auspices of the Centre for Visual and Decision Informatics, a USA National Science Foundation initiative. Peter has authored and co-authored academic papers including "Data Is the New Currency" in the proceedings of New Security Paradigms Workshop. Other writing includes books on "Ingres Visual Programming", co-authoring of "The Innovative CIO: How IT Leaders Can Drive Business Innovation" and co-editor/contributor to "MOdel-Driven Approach for design and execution of applications on multiple Clouds" Steven Greenspan, PhD is an innovator of information and communications technology (ICT), with over 50 publications in peer-reviewed journals and 79 US patents, including the first patent to describe two-factor and two-device authentication and authorization. This invention is widely used throughout the world to ensure secure access to web services and it showcased the value of keeping the human-in-the-loop. His current research interests include user experience and collaboration in complex systems, differential privacy, ethical decision-making, and innovative approaches for integrating scientific research into socially responsible applications and services. Outside of his professional work, he devotes much of his time to community groups that focus on environmental, economic and social justice. He also serves on the advisory boards of the AABGU/ Philadelphia Academic Bridge, and several startups. Steve has a PhD in Cognitive Psychology from the State University of New York at Buffalo and conducted postdoctoral research at the University of California at San Diego and Indiana University. During the writing of this book, he was a Visiting Scholar at the University of Virginia. Previously, he was a Research Scientist and Vice President of Strategic Research at CA Technologies managing an international team of information technology scientists. He has also consulted to Avaya on the UX design of mobile phones, and was a Distinguished Member of the Technical Staff at AT&T Bell Laboratories.

Part 1: Introduction Chapter 1: Introduction to the Future of Work and Automation The introduction sets out the context and contents of the book. It introduces automation and robotics as a technology and AI as a core technology in those areas. The authors are engaged in several research projects that will tackle some of these fundamental challenges. The research is then placed into the context of the future of work. The possible outcomes of each research project are placed in a spectrum of automation for the future. The changing nature of work in the future is outlined as a potential outcome of the changes that are thought inevitable with the increasing automation of existing tasks and jobs. The scene is set for the subsequent introductory chapter on the current thinking about the automation/human relationship and the changes that are likely to happen. Chapter 2: Are Robots Replacing You? There are many conflicting arguments about the impact of automation on the working population and even on the impact on government and individual's economies. This chapter discusses some of the theories and predictions from commentators and analysts who have interesting and often different views of the next 10 or 20 years. There is no doubt that automation will be disruptive, displacing people from many tasks, but there is some doubt that it will be destructive, replacing people from many jobs and leaving a world with massive unemployment. The next section discusses the technology challenges that this changing world is influencing. Part 2: Technology Challenges Chapter 3: Rules that Don't Work, Bots, and Chatbots Although applications have long been available that endeavour to mimic a human response to enquiries or questions these applications take a considerable time to develop because of the need to map all of the conceivable responses to any question that can be posed. A recent advance in the automation of tasks is the development of the AI software robots or bots. These software robots, used most frequently in a support service capacity, mimic the style of an online or telephone conversation that would be expected from a person. There are complex AI decisions that drive the interaction between bot and human, but the most crucial development is the bot's ability to learn and improve responses to their interlocutor. Chapter 4: Robotic Process Automation Many processes can be automated and have been in the past. Early IT based automation were in the area of automating simple ledger systems and process, initially in financial systems. Robotic Process Automation (RPA) is the most current methodology that can automate complex business processes. The combination of process analysis, process mining and AI tools that can learn is making an impact. The ability to develop fast and repeatable processes that deliver decisions is transforming the financial world. Insurance and Banking organisations are using RPA to personalise their products and it is becoming more difficult to tell if the voice, text or decision you get from an insurance application is from a human or a machine. Managing the risk of a poor or opaque decision-making process will be a feature of this type of automation in the future. The ALOHA project is investigating this aspect of machine learning and AI management. The need to integrate complex data and ensure that the data is not biased is demonstrated and the challenges will be examined in more detail in Chapter 7; Data Fusion. Chapter 5: Robots, Collaboration, and Collaborative Robots The world of Robotics is very broad and takes in industrial robots, human augmentation, and collaborative robots. This chapter will have a focus on the challenges of Collaborative Robots (COBOTS) since they are the subject of a research project sponsored by the Centre for Visual and Decision Informatics. COBOTS can range from manipulators that are moved by humans to robots that carry out generalised tasks in collabor