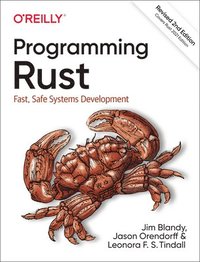 Jim Blandy has been programming since 1981, and writing Free software since 1990. He has been the maintainer of GNU Emacs and GNU Guile, and a maintainer of GDB, the GNU Debugger. He is one of the original designers of the Subversion version control system. Jim now works for Mozilla on Firefox's web developer tools. Jason Orendorff hacks C++ for Mozilla, where he is module owner of the JavaScript engine that's in Firefox. He is an active member of the Nashville developer community and an occasional organizer of homegrown tech events. He is interested in grammar, baking, time travel, and helping people learn about complicated topics. Leonora Tindall is a type system enthusiast and software engineer who uses Rust, Elixir, and other advanced languages to build robust and resilient systems software in high-impact areas like healthcare and data ownership. She works on a variety of open source projects, from genetic algorithms that evolve programs in strange languages to the Rust core libraries and crate ecosystem, and enjoys the experience of contributing to supportive and diverse community projects.