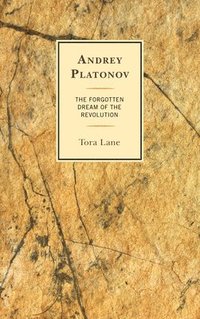 The Forgotten Dream of the Revolution

av Tora Lane
Häftad Engelska, 2020-07-06
452
Köp
Spara som favorit
Finns även som
Visa alla 2 format & utgåvor
This book traces the originality of Andrey Platonov's vision of the Revolution in readings of his works. It has been common in Platonov scholarship to measure him within the parameters of a political pro et contra the October Revolution and Soviet society, but the proposal of this book is to look for the way in which the writer continuously asked into the disastrous aspects of the implementation of a new proletarian community for what they could tell us about the promise of the Revolution to open up the experience of the world as common. In readings of selected works by Andrei Platonov I follow the development of his chronicle of revolutionary society, and from within it the outline of the forgotten utopian dream of a common world. I bring Platonov into a dialogue with certain questions that arise from the philosophy of Martin Heidegger and that were later re-addressed in the works of Maurice Blanchot, Georges Bataille and Jean-Luc Nancy, related to the experience of the modern world in terms of communality, groundlessness, memory, interiority. I show that Platonov writes the Revolution as an implementation of common being in society that needs to retrieve the forgotten memory of what being in common means.
Visa hela texten

Lane (Soedertoern Univ., Sweden) should be commended for taking on a subject as complex as Andrey Platonov (1899-1951), whose ideas, language, and views of history-whether taken individually or together-have challenged readers for decades. Lane examines Platonov's works to see how he reconciles the disastrous effects of the Russian Revolution with its Utopian promise. . . Accordingly, this welcome exegesis of Platonov's works will appeal to those well-acquainted with Platonov and philosophers such as Heidegger, Blanchot, and Bataille and to less-sophisticated students of Russian literature. Her translations are good as are her notes, which appear at the end of each chapter. The ample list of references will lead anyone interested in Platonov to fertile ground for further study. Lane's study will be invaluable to Russianists, historians of the Russian Revolution, and anyone interested in Utopian ideals and their hidden capacity for tyranny. Summing Up: Recommended. Ambitious upper-division undergraduates, graduate students, researchers, and faculty. * CHOICE * Lane's broader commitment to seeing Platonov through a distinct philosophical prism is productive and perceptive, and may well serve to stimulate further debate. * Slavic Review * Lane's idea that what makes Platonov distinctive is his search for revolutionary consciousness in literature as such-as a mode of ironic distance, alienation, or a frustrated alternative to life itself-is interesting and generally consonant with the view prevalent in other scholarship on Platonov. The readings she offers are also eloquently sensitive to Platonov's existential themes. . . . Lane's reading of Platonov on the broader plane of twentieth-century thought is welcome-and deserves to be expanded upon. * The Russian Review * Tora Lane does much to bring out the complexity, the subtlety and the hopefulness of Platonov's work, helping the reader to understand why so many Russian writers and critics see Platonov as the greatest Russian prose-writer of the last century. -- Robert Chandler, English translator of Andrey Platonov's "The Foundation Pit" and "Soul and Other Stories" and Vasily Grossman's "Life and Fate and Stalingrad" Andrey Platonov is arguably one of the greatest, aesthetically most original and politically most interesting writers of twentieth century world literature. By stereoscopically examining Platonov's aesthetics as well as the Soviet idea of communism, Tora Lane reveals with brilliance, precision and erudition the originality of Platonov's style and social vision. This is an important book not just for its analysis of Platonov but also for its deep insights into the Russian Revolution and the existential and political energies released by early Soviet communism. -- Stefan Jonsson, Linkoeping University, author of Crowds and Democracy

Tora Lane is as researcher at Soedertoern University.

Introduction A Proletarian Existentialist Realism Chevengur and the Movement of the Revolution The Foundation Pit and the Problem of Time Happy Moscow and Universal Love Dzhan: Retrieving the Inner Reka Potudan: Love in Existential Poverty The Ecstasy of Common Being and the Ecstasy of Existence in Common: "Inspired People" and "The Return" Afterword: The Memory of Utopia and the Utopia of Memory Bibliography About the Author