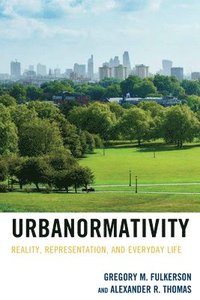 This book examines the tensions, both real and imagined, between urban and rural life in a predominantly American context. Fulkerson and Thomas (both, SUNY Oneonta) argue that the urban is conflated with what is normal, hence the eponymous portmanteau "urbanormativity." Essentially, urbanormativity is part of the ideological fabric of modernity, where urbanization and progress are often viewed as synonymous with one another. Such a worldview, according to the authors, often promotes the interests and values of urbanization at the expense of rural life. This social construction has had damaging social, psychological, economic, and cultural effects on rural living. Drawing attention to these pervasive and overlooked effects is the text's greatest strength. . . this is an interesting study of the rural/urban dichotomy and would be of interest to those who live in the country, the city, or anywhere in between, especially if they are interested in questioning what is normal. Summing Up: Recommended. Graduate students and faculty. * Choice * Urbanormativity is suited well for undergraduate students who have had limited exposure to rural scholarship. It is a useful introductory book that outlines a central issue of urban-rural dynamics, without relying on previous knowledge of this field or concept. The book is written in an easily accessible and well-organized way, and would serve an undergraduate class well. It takes the concept of urbanormativity and applies it to a variety of fields-politics, law, media-while also incorporating current examples and issues, making it a useful book to expose undergraduate students to rural sociology and the issue of urbanormativity. * Rural Sociology * Thomas and Fulkerson's new book adds a deep understanding the social divide between urban and rural. This new book provides a deep discussion of the complexity of what is know as urban life and its association with progress in comparison with rural life and its mix of reality and symbolism. The authors provide a solid understanding of the social, economic, political, and attitudinal differences based upon place. It is a must read for those who want to understand the development, growth, and spread of the urban/rural divide. -- Stephanie A. Bennett-Knapp, The College of St. Rose Thomas & Fulkerson's newest volume offers up a critical reconsideration of how we make sense of rural people and rural places, calling into question the oversimplified representations of rural dwellers, rural livelihoods, and rural culture as reflected in North American urbanormative discourses on the rural. Their exploration reveals how dependency of the urban upon the rural becomes invisible through epistemic distancing as well as through structures-both physical and social-that disadvantage the rural to the benefit of the urban. This includes a consideration of how rural industries, including energy, agriculture, timber and other extractive activities enrich urban populations while degrading the environment and impoverishing rural workers. They further emphasize the global dimensions of this urban-rural dependency and connect the myriad systems that work to diminish the importance of rural contributions in an increasingly urban world. This lucidly written book weaves theory and field-based evidence into a volume that will engage an academic audience, as well as policymakers and those concerned with extending social justice efforts into rural communities. -- Aimee Vieira, Norwich University