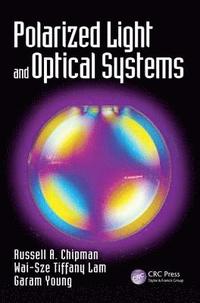 av Russell A Chipman, Garam Young, Wai Sze Tiffany Lam
Inbunden Engelska, 2018-02-05
2482
Köp
Spara som favorit
Finns även som
Visa alla 2 format & utgåvor
Polarized Light and Optical Systems presents polarization optics for undergraduate and graduate students in a way which makes classroom teaching relevant to current issues in optical engineering. This curriculum has been developed and refined for a decade and a half at the University of Arizona's College of Optical Sciences. Polarized Light and Optical Systems provides a reference for the optical engineer and optical designer in issues related to building polarimeters, designing displays, and polarization critical optical systems. The central theme of Polarized Light and Optical Systems is a unifying treatment of polarization elements as optical elements and optical elements as polarization elements. Key Features Comprehensive presentation of Jones calculus and Mueller calculus with tables and derivations of the Jones and Mueller matrices for polarization elements and polarization effects Classroom-appropriate presentations of polarization of birefringent materials, thin films, stress birefringence, crystal polarizers, liquid crystals, and gratings Discussion of the many forms of polarimeters, their trade-offs, data reduction methods, and polarization artifacts Exposition of the polarization ray tracing calculus to integrate polarization with ray tracing Explanation of the sources of polarization aberrations in optical systems and the functional forms of these polarization aberrations Problem sets to build students' problem-solving capabilities.
Visa hela texten

"The authors have produced an excellent text on polarized light and optical systems, which was developed and tested for 15 years at the University of Arizona's College of Optical Sciences. This comprehensive reference is well suited to support a flexible curriculum for undergraduate and graduate students majoring in optical design or engineering...Altogether, it should be favorably received by a wide readership, including applied scientists." ~Axel Mainzer Koenig, CEO, 21st Century Data Analysis, Portland, Oregon, USA

Russell Chipman, PhD, is professor of optical sciences at the University of Arizona and a visiting professor at the Center for Optics Research and Education (CORE), Utsunomiya University, Japan. He teaches courses in polarized light, polarimetry, and polarization optical design at both universities. Prof. Chipman received his BS in physics from Massachusetts Institute of Technology (MIT) and his MS and PhD in optical sciences from the University of Arizona. He is a fellow of The Optical Society (OSA) and The International Society for Optics and Photonics (SPIE). He received SPIE's 2007 G.G. Stokes Award for research in Polarimetry and OSA's Joseph Fraunhofer Award/Robert Burley Award for Optical Engineering in 2015. He is a co-investigator on NASA/JPL's Multi-Angle Imager for Aerosols, a polarimeter scheduled for launch into earth orbit around 2021 for monitoring aerosols and pollution in metropolitan areas. He is also developing UV and IR polarimeter breadboards and analysis methods for other NASA exoplanet and remote sensing missions. He has recently focused on developing the Polaris-M polarization ray tracing code, which analyzes optical systems with anisotropic materials, electro-optic modulators, diffractive optical elements, polarized scattered light, and many other effects. His hobbies include hiking, Japanese language, rabbits, and music. Wai-Sze Tiffany Lam, PhD, was born and raised in Hong Kong. She is currently an optical scientist in Facebook's Oculus Research. She received her BS in optical engineering and her MS and PhD in optical sciences from the University of Arizona. In her research she developed robust optical modeling and polarization simulation for birefringent and optically active optical components, components with stress birefringence, the aberrations in crystal retarders and polarizers, and the modeling of liquid crystal cells. Many of these algorithms form the basis of the commercial ray tracing code, Polaris-M, marketed by Airy Optics. Garam Young, PhD, graduated with a BS in physics from Seoul National University in Korea and received her doctorate from University of Arizona's College of Optical Sciences, also earning Valedictorian and Outstanding Graduate Student honors. She then developed polarization features and optimization features for CODE V and LightTools with Synopsys in Pasadena, and she currently works as an optical and illumination engineer in the Bay area. Her husband and daughter keep her busy at home.