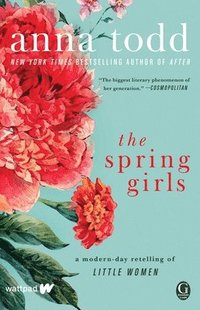 A Modern-Day Retelling of Little Women

av Anna Todd
Häftad Engelska, 2018-01-11
107
Köp
Spara som favorit
Finns även som
Visa alla 1 format & utgåvor
Four sisters desperately seeking the blueprints to life-the modern-day retelling of Louisa May Alcott's Little Women like only Anna Todd (After, Imagines) could do. The Spring Girls-Meg, Jo, Beth, and Amy-are a force of nature on the New Orleans military base where they live. As different as they are, with their father on tour in Iraq and their mother hiding something, their fears are very much the same. Struggling to build lives they can be proud of and that will lift them out of their humble station in life, one year will determine all that their futures can become. The oldest, Meg, will be an officer's wife and enter military society like so many of the women she admires. If her passion-and her reputation-don't derail her. Beth, the workhorse of the family, is afraid to leave the house, is afraid she'll never figure out who she really is. Jo just wants out. Wishing she could skip to graduation, she dreams of a life in New York City and a career in journalism where she can impact the world. Nothing can stop her-not even love. And Amy, the youngest, is watching all her sisters, learning from how they handle themselves. For better or worse. With plenty of sass, romance, and drama, The Spring Girls revisits Louisa May Alcott's classic Little Women, and brings its themes of love, war, class, adolescence, and family into the language of the twenty-first century.
Visa hela texten

"This enjoyable novel explores the bonds of sisterhood, first love, and teenage angst, and while it echoes Alcott's novel, it provides a refreshing 21st-century update." -Publisher's Weekly "Todd [is] the biggest literary phenom of her generation." -Cosmopolitan "[Todd's] legion of loyal fans, who have followed her from her fanfiction days on the self-publishing platform, Wattpad, will be thrilled." -Booklist "After is a can't-miss book-but get ready to feel emotions that you weren't sure a book could bring out of you." -Fangirlish on AFTER "The Mr. Darcy and Lizzy Bennet of our time. . . ." -That's Normal on the AFTER series "Be prepared to have an emotional explosion!" -Biblio Belles on the AFTER series This book will have you from the first page." -A Bookish Escape on AFTER

Anna Todd (writer/producer/influencer) is the New York Times bestselling author of the After series, which has been released in thirty-five languages and has sold more than twelve million copies worldwide, becoming a #1 bestseller in several countries. Always an avid reader, Todd began writing stories on her phone through Wattpad, with After becoming the platform's most-read series with over two billion reads. She has served as a producer and screenwriter on the film adaptations of After and After We Collided, and in 2017, she founded the entertainment company Frayed Pages Media to produce innovative and creative work across film, television, and publishing. A native of Ohio, she lives with her family in Los Angeles.