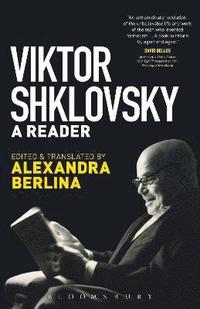 Köp
Spara som favorit
Kan levereras innan julafton!
Finns även som
Visa alla 3 format & utgåvor
Viktor Shklovsky (1893-1984) was both patriarch and enfant terrible of Formalism, a literary and film scholar, a fiction writer and the protagonist of other people's novels, instructor of an armored division and professor at the Art History Institute, revolutionary and counterrevolutionary. His work was deeply informed by his long and eventful life. He wrote for over seventy years, both as a very young man in the wake of the Russian revolution and as a ninety-year old, never tiring of analyzing the workings of literature. Viktor Shklovsky: A Reader is the first book that collects crucial writings from across Shklovsky's career, serving as an entry point for first-time readers. It presents new translations of key texts, interspersed with excerpts from memoirs and letters, as well as important work that has not appeared in English before.
Visa hela texten

An extraordinary revelation of the unbelievable life and work of the man who invented formalism. Alexandra Berlina has done a great service to literature by rescuing these fragments of one of the most lively and irreverent minds of the last century. A book to return to, again and again. * David Bellos, Meredith Howland Pyne Professor of French Literature, Princeton University, USA, and author of Is That a Fish in Your Ear? Translation and the Meaning of Everything * This collection allows all readers to approach the life and opinions of Viktor Shklovsky, one of the most fascinating figures of Russian cultural life in the twentieth century. * Tzvetan Todorov, historian, essayist, and author of The Fantastic: A Structural Approach to a Literary Genre * Viktor Shklovsky: A Reader, thoughtfully translated and edited by Alexandra Berlina, is a valiant reminder of the extraordinary versatility, humor, brilliance, and sensitivity the Formalist label has come to conceal. ... With this exemplary new anthology, Alexandra Berlina has helped free Shklovsky from the clanging of -isms, allowing new readers to appreciate his thought in the fullness of its diversity and beauty. * The Los Angeles Review of Books * The reviewed omnibus, it must be added, challenges yet another well entrenched doxa concerning Shklovsky's work. Traditionally, it was regarded as consisting of two unequal parts: the impishly appealing pre-1929 formalist output followed by the appalling potboilers written after the author reluctantly renounced his formalist stance ... Berlina, though, managed to erase the perceived caesura between the early and late Shklovsky's writings not just by telling but by showing. Her Reader, assembling texts from all periods of his long writerly career, clearly highlighted the motivic iterations binding them together as well as their overall thematic unity. * The Russian Review *

Viktor Shklovsky (1893-1984) was one of the foremost literary critics and theorists of the 20th century. One of the founders of the Formalist movement in literary criticism, his seminal works include "Art as Method" (1917), Theory of Prose (1925), Third Factory (1926), classic studies of Tolstoy and Mayakovsky, and a memoir of the Russian civil-war era, A Sentimental Journey: Memoirs, 1917-1922 (1923). Alexandra Berlina is Postdoctoral Researcher in Literary Studies at the University of Erfurt, Germany. Her translations of Brodsky's poems "Dido and Aeneas" and "You can't tell a gnat..." have won awards from the 'Willis Barnstone Translation Prize' and the 'The Joseph Brodsky/Stephen Spender Prize'. She is the author of Brodsky Translating Brodsky (Bloomsbury, 2014).

Translator's Introduction Viktor Shklovsky: Life and Work Ostranenie and Other Key Concepts Shklovsky in the West: Reception and Heritage The Poker of Russian Formalism: Shklovsky as Protagonist In Fiction In Diaries and Memoirs Shklovsky's Shorts Shklovsky's Style Selection, Translation and Formal Remarks Section I: OPOYAZ Publications Translator's Introduction Resurrection of the Word (1914) Art as Device (1917/1919) Literature beyond "Plot" (1921/1925) Literature beyond Theme; Non-Linear Inheritance Literature beyond Genre; Digressions Literature beyond Categories; Seeing like a Child Section II: Autobiographic Hybrids Translator's Introduction A Letter to Roman Jakobson (1922/1990) Zoo, or Letters Not About Love (1923/1965) Author's Preface to the First Edition A Second Preface for an Old Book A Third Preface Letter Four Letter Six Letter Eight Letter Eleven Letter Seventeen Letter Twenty Two Letter Twenty Eight Letter Thirty A Sentimental Journey (1923) Revolution and the Front The Writing Desk Knight's Move (1923) Preface One Driving Nails with a Samovar On "The Great Metalworker" A Thousand Herrings The Tsar's Kitchen Teaser Stallions (1924/1990) The Third Factory (1926) The First Factory The Second Factory The Third Factory Section III: Early Soviet Criticism and Advice to Young Writers Translator's Introduction The Technique of Writing Craft (1927) Introduction: Don't Hurry to Become a Professional Writer Newspaper Work Narrative Prose Unfolding a Text A Few Words on Poetry Conclusion Hamburg Score (1928) Babel: A Critical Romance (1924) In Defense of the Sociological Method (1927) Ten Years (1927) Hamburg Score (1928) The Way I Write (1930/1990) Section IV: After the Freeze Translator's Introduction Once Upon A Time (1964) Childhood Youth The Ending of Youth Tales about Prose (1966/1983) A Note From the Author On the Novella Some Empirical Remarks on the Methods of Connecting Novellas On the Different Meanings of "Character" when Applied to Literary Works of Different Epochs On the True Unity of Works of Art What Happened after the Plague of 1348? On the Sense of Wonder Scenes of Recognition in Dickens Concept Renewal Letters to Nikita Shklovsky (1965-1969/2002) 05.10.1965 05.10.1966 19.04.1968 02.04.1969 20.07.1969 Bowstring. On the Dissimilarity of the Similar. (1970) Energy of Delusion. A Book on Plot. (1981) Section V: On the Theory of Prose (1983) Translator's Introduction Preface Words Free the Soul from Narrowness: About the OPOYAZ The Rhyme of Poetry. The Rhyme of Prose. Structuralism through the Looking Glass: A Farewell The First Unsuccessful Blueprint of a Whale: Chekhov's "Darling" The Links of Art Do Not Repeat Each Other. Once Again, on the Dissimilarity of the Similar. Sterne In the Footsteps of Old Discoveries and Inventions The Problem of Time in Art The Lungs Are for Breathing. Thoughts Out Loud. Yet Another Foreword Ostranenie In Reply to a Questionnaire [More Thoughts Out Loud] Section VI: In 60 Years: Works on Cinema. (1985) Translator's Introduction Introduction (1985) On Cinema (1919) The Plot in Cinema (1923) Chaplin as Policeman (1923) The Semantics of Cinema (1925) Poetry and Prose in Cinema (1927) On Re-Editing Films (1927) Five Feuilletons on Eisenstein (1926) Talking to Friends (1939) Happy Fable-land (1948) What the Character Knows and What the Audience Knows (1959) The Emergence of the Word (1963) Return the Ball into the Game (1970) Unread Dream (1984) Instead of an Afterword: A Letter to Evgeny Gabrilovich (1984)