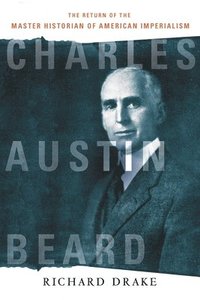 The Return of the Master Historian of American Imperialism

av Richard Drake
Inbunden Engelska, 2018-12-15
715
Köp
Spara som favorit
Finns även som
Visa alla 1 format & utgåvor
Richard Drake presents a new interpretation of Charles Austin Beard's life and work. The foremost American historian and a leading public intellectual in the first half of the twentieth century, Beard participated actively in the debates about American politics and foreign policy surrounding the two world wars. Drake takes this famous man's life and rewrites his intellectual biography by placing the European dimension of Beard's thought at the center. This radical change of critical focus allows Drake to correct previous biographers' oversights and, in Charles Austin Beard, present a far more nuanced appreciation for Beard's life than we have read before. Drake proposes a restoration of Beard's professional reputation, which he lost in large part because of his extremely unpopular opposition to America's intervention in World War II. Drake analyzes the stages of Beard's development as a historian and critic: his role as an intellectual leader in the Progressive movement, the support that he gave to the cause of American intervention in World War I, and his subsequent revisionist repudiation of Wilsonian ideals and embrace of non-interventionism in the lead-up to World War II. Many of his dire predictions about the inevitable consequences of pre-World War II American foreign policy have come to pass. Drake shows that, as Americans tally the ruinous costs-both financial and moral-of nation-building and informal empire, the life and work of this prophet of history merit a thorough reexamination.
Visa hela texten

"An incisive view of the power of Beard, and a sense of his intellectual origins.... Drake's worthy volume seeks to take full measure of Charles Beard's contribution to the scholarship of American history." -- Paul Buhle * The Progressive * "An estimable study.... Drake's fine book... performs an important service. It invites readers to do what Beard himself strove to do as he kept close watch on events during the 1930s and 1940s: to remain alert to hypocrisy and contradiction contributing to the misuse of American power. In an era awash with fake news, the handiwork not only of policymakers but of the media itself, this task becomes more important than ever." -- Andrew Bacevich * The American Conservative * "An unfolding account of [Charles Austin Beard's] ideas and arguments.... The cold, hard face of Charles Austin Beard peers from the front cover of Mr. Drake's biography, as if from the other side of a tinted glass. His is a strong, hard visage, that of a man who long ago had made up his own mind about the world and America's limited place in it." * Wall Street Journal * "Drake's book is to be recommended for historians of the interwar period in the United States, the 1930s, and the intellectual history of the United States in the first half of the twentieth century, as well as anyone interested in the range of historiographical thought in American history. Drake breaks new ground in showing Beard's relationship to European social thought, as well as Beard's friendship with Herbert Hoover in the later 1930s... it will likely remain a standard work for many years to come, one that anyone interested in Charles Beard should not pass over." * H-Net * "Drake has written a straightforward account of Beard's rise and fall... The book excels at showing how Beard's understanding of American history." * The Journal of American History *

Richard Drake is the Lucile Speer Research Chair in Politics and History at the University of Montana. He has published a number of books, including, most recently, The Education of an Anti-Imperialist.

Preface Acknowledgments Introduction: The Beardian Interpretation of American History 1. Discovering the Economic Taproot of Imperialism 2. Two Contrasting Progressive Views of the Great War 3. Becoming a Revisionist 4. Washington and Wall Street Working Together for War 5. Isolationism versus Internationalism 6. A Wartime Trilogy 7. Waging War for the Four Freedoms 8. Beard Finds an Ally in Herbert Hoover 9. Attacking "the Saint" 10. Defending Beard after the Fall 11. Beard's Philosophy of History and American Imperialism Conclusion: The Sad Historian of the Pensive Plain Notes Index