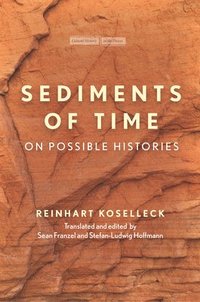 av Reinhart Koselleck, Sean Franzel, Stefan-Ludwig Hoffmann
Häftad Engelska, 2018-05-08
332
Köp
Spara som favorit
Finns även som
Visa alla 2 format & utgåvor
Sediments of Time features the most important essays by renowned German historian Reinhart Koselleck not previously available in English, several of them essential to his theory of history. The volume sheds new light on Koselleck's crucial concerns, including his theory of sediments of time; his theory of historical repetition, duration, and acceleration; his encounters with philosophical hermeneutics and political and legal thought; his concern with the limits of historical meaning; and his views on historical commemoration, including that of the Second World War and the Holocaust. A critical introduction addresses some of the challenges and potentials of Koselleck's reception in the Anglophone world.
Visa hela texten

"The definitive collection in English of Reinhart Koselleck's major essays on time, the history of concepts, and memory, Sediments of Time reaches well beyond the scope of existing anthologies, substantiating the immense achievement of his work. The volume also serves as a brilliant introduction to the celebrated historian's thought at a time when interest in temporality, political iconology, and the relationship between concepts and society continues to grow." -Stefanos Geroulanos, New York University "In the Anglophone world, Reinhart Koselleck's story is that of an unfulfilled reception. Remarkably put together, this collection is a rectification that promises him a new career. Having trained as a historian in post-1945 Germany, Koselleck put the concepts of experience, waiting, and repetition at the center of his thought. In the midst of today's intellectual confusion, his work presents a major benchmark."-Francois Hartog, author of Regimes of Historicity "[I]t is the ambition to deconstruct, and not to underpin, the foundations of historical philosophy that runs like a red thread through the essays, which all display an immense erudition, an intellectual curiosity, and a remarkably wide range of thematic concerns that can be taken in many different directions...Sediments of Time provides an excellent (re)introduction to Koselleck, which can hopefully spur a more nuanced and comprehensive discussion and reception of his work in this part of the world."--Niklas Olsen, American Historical Review "Franzel and Hoffmann have created a volume that reads with both clarity and elegance in English....This volume will be [a] valuable resource for both practitioners and theorists of history who wish to undertake a deeper excavation of Koselleck's thought. It also promises to embed Koselleck more firmly among the layers of Anglophone historiography."-Jennifer Allen, German History "[These] texts address a wide range of philosophers and scientists alike, offering highly innovative 'food for thought.' One also finds therein signs of the important influence these Essays have already exerted, in new concepts such as 'mapping' and in the necessity for studies of History as Time to combine with geopolitics."-Raphaelle Costa de Beauregard, Kronoscope "Sediments of Time, in short, offers literary historians the opportunity to reconsider the relation between history and fiction, bodily and linguistic experience, preverbal knowledge and discourse, singularity and repetition. With scholars across the humanities currently recovering ontological and materialist perspectives in order to move beyond the limitations of the linguistic turn, Koselleck's emphasis on the pre- and extralinguistic ought to become newly relevant at the present intellectual juncture."-Johannes Voelz, American Literary History

1. Sediments of Time 2. Fiction and Historical Reality 3. Space and History 4. Historik and Hermeneutics 5. Goethe's Untimely History 6. Does History Accelerate? 7. Constancy and Change of All Contemporary Histories 8. History, Law, and Justice 9. Linguistic Change and the History of Events 10. Structures of Repetition in Language and History 11. On the Meaning and Absurdity in History 12. Concepts of the Enemy 13. Sluices of Memory and Sediments of Experiences 14. Behind the Deadly Line: The Age of Totality 15. Some Forms and Traditions of Negative Memory 16. Histories in the Plural and the Theory of History. An Interview with Carsten Dutt