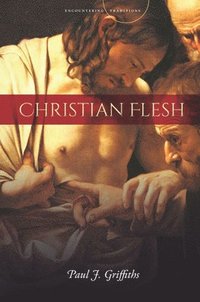 av Paul J Griffiths
Häftad Engelska, 2018-09-25
285
Köp
Spara som favorit
Finns även som
Visa alla 2 format & utgåvor
A sustained and systematic theological reflection on the idea that being a Christian is, first and last, a matter of the flesh, Christian Flesh shows us what being a Christian means for fleshly existence. Depicting and analyzing what the Christian tradition has to say about the flesh of Christians in relation to that of Christ, the book shows that some kinds of fleshly activity conform well to being a Christian, while others are in tension with it. But to lead a Christian life is to be unconstrained by ordinary ethical norms. Arguing that no particular case of fleshly activity is forbidden, Paul J. Griffiths illustrates his message through extended case studies of what it is for Christians to eat, to clothe themselves, and to engage in physical intimacy.
Visa hela texten

"Paul Griffiths, one of the few truly creative theologians of our time, has produced another brilliant and provocative work of speculative theology, demonstrating the centrality of the flesh to the mysteries and doctrines of the Christian faith and examining questions of the greatest significance today and always." -- Carol Zaleski * Smith College * "In this trenchant and careful theological treatment of our embodiment, Paul Griffiths puts the stress exactly where it should be put--on the possibility of transfigured touch. In doing so he does not shy away from the violence involved in all fallen caresses, nor the degree of caress that survives even in our violent touches. By focusing on the varieties of touch, he is able to untangle several unfortunate arguments between liberals and conservatives in a most refreshing way. One does not have to agree with all his conclusions to be immensely assisted by this book and grateful to him for writing it." -- John Milbank * University of Nottingham * "As ever, Paul Griffiths is almost alarming in his lucidity and intelligence. Very few theologians can boast a comparable combination of profound questioning and precise reasoning. This is a book worthy of the most serious reflection, debate, and admiration." -- David Bentley Hart * Notre Dame Institute for Advanced Study * "Readers familiar with Paul J. Griffiths's work know they must be prepared to encounter provocation in his new book, Christian Flesh, for Griffiths is a provocateur in the best sense, someone who intends to leave the reader uncomfortable and thereby provoke conversation. Griffiths enjoys a good scrap of the clarifying kind, and in this book I think he has invited readers of various stripes to a variety of good scraps....This book has prompted me to ponder the issues it raises more deeply, for which I have its provocative author to thank." -- John Cavadini * <i>Commonweal Magazine</i> * "Christian Flesh can help Christians of all persuasions to think deeply and theologically about the body, and what it means to live as a faithful body cleaved to Jesus in the sacraments. Griffiths is driven by theology, not by the latest arguments from the political, legal, and scientific sphere, and in that, his work is both enriching and refreshing." -- Aaron Klink * <i>Anglican Theological Review</i> * "Christian Flesh possesses an integrity and exhaustiveness that evades condensed representation. There is much to recommend its reading, and I would struggle to find any reservations for recommending it. The writing is approachable, even when dense, and its honesty and transparency are commendable." -- Jonathan M. Platter * <i>Reading Religion</i> * "Christian Flesh is supremely lucid and beautifully austere....[In this review,] I have covered only a sample of the provocative, inventive, and profound speculations that make up Christian Flesh. I suspect its influence will be felt for many years as scholars work through its implications and pursue its many fascinating leads." -- Evan Sandsmark * <i>Modern Theology</i> * "[T]hose provocative proposals which linger with and even agitate the reader long after the turn of the last page - are among the cardinal reasons why [Griffiths's] books deserve close, careful attention. He has given us much to ponder in Christian Flesh, and in doing so has provided a model of well-reasoned, stimulating and enduring theology." -- R. David Nelson * <i>International Journal of Systematic Theology</i> *

Contents and Abstracts1Flesh Devastated chapter abstractThis chapter distinguishes body from flesh and shows the latter to be, first, haptic, which is to say constituted and maintained as flesh by touch in its many varieties; second, self-contiguous and bounded, separated in fact and experience from other bodies of flesh, while also located in time and space; third, a gift received from the caresses of others, without which flesh can neither come to be as such, nor continue in being; and fourth, fragile and mortal, located in a world in which fleshly pain is a constant threat and a frequent companion, and in which death, the end of flesh, is always close at hand. 2Flesh Transfigured chapter abstractThis chapter shows what human flesh would be like were it not damaged, and does so from a Christian point of view, by describing the flesh of Jesus Christ during the period from his conception to his death on the cross (natal flesh), from his resurrection to his ascension (resurrected flesh), and from his ascension onwards (ascended flesh). As natal flesh, the book argues, his flesh was exempt from the ordinary damage of pain and mortality except as these served particular purposes. The chapter shows, in its analysis of this and its engagement with counterviews, that human flesh's ordinary subjection to these things isn't essential to it, and begins to sketch what flesh would be like were it not so subject. 3Flesh Cleaved chapter abstractThis chapter shows what it means for human flesh to cleave to-to be made intimate with, incorporated into-the flesh of Christ through baptism. Baptism is depicted as a matter of the flesh and as an act that newly relates the flesh of the baptized to Christ's flesh. Paul's discussion of these matters in the Corinthian correspondence is interpreted, with special attention to what it means to say that the Christian's bodily members are, analogically and participatorily, Christ's. Being intimate with one kind of flesh-namely Christ's-means that some other kinds of fleshly intimacy are ruled inappropriate; the scriptural language of fornication and idolatry is presented and discussed as a way of clarifying this, and the chapter argues that appropriate Christian fleshly conduct is better presented by way of hagiography-writing the lives of those who exhibit it-than by way of argument or codification. 4Clothes chapter abstractThis chapter shows what it is to be clothed, and what functions the wearing of clothes serve in human life. It shows the importance of nakedness in baptism and argues that there is no distinctively or properly Christian clothing: no clothes intrinsically proper to, or improper for, Christian flesh. Local sartorial conventions, however, may be observed by Christians, and should be unless they carry with them a signal that they are more than conventional by being rooted in the order of being. If they carry that signal-as locally gender-specific modes of dress, for example, often do-then they can become both fornicatory and idolatrous. The chapter argues that Christians have a radical freedom with respect to dress because of their cleaving to the flesh of Christ. 5Food chapter abstractThis chapter shows what it is to eat and drink and asks what is appropriate in that sphere for Christian flesh. There are, for Christians, no forbidden foods, and none required. All are on a par at least in that all eating is intimate with slaughter (whether of plants or animals). The sole exception is eucharistic eating, and this shows that all non-eucharistic eating ought to be accompanied by lament as well as by delight. Fasting is analyzed, depicted as a proper Christian response to this situation, and articulated with both eschatology and eucharistic theology. Gluttony and other forms of scandalous eating are treated, and the mistakes evident in them shown. 6Caresses chapter abstractThis chapter analyzes the varieties of human fleshly exchange as these appear to Christians. Fleshly contacts f