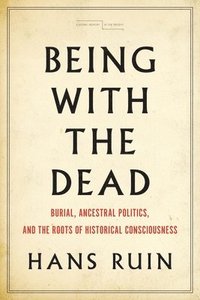 Being with the Dead

Burial, Ancestral Politics, and the Roots of Historical Consciousness

av Hans Ruin
Häftad Engelska, 2019-01-29
285
Köp
Spara som favorit
Finns även som
Visa alla 2 format & utgåvor
Philosophy, Socrates declared, is the art of dying. This book underscores that it is also the art of learning to live and share the earth with those who have come before us. Burial, with its surrounding rituals, is the most ancient documented cultural-symbolic practice: all humans have developed techniques of caring for and communicating with the dead. The premise of Being with the Dead is that we can explore our lives with the dead as a cross-cultural existential a priori out of which the basic forms of historical consciousness emerge. Care for the dead is not just about the symbolic handling of mortal remains; it also points to a necropolitics, the social bond between the dead and living that holds societies together-a shared space or polis where the dead are maintained among the living. Moving from mortuary rituals to literary representations, from the problem of ancestrality to technologies of survival and intergenerational communication, Hans Ruin explores the epistemological, ethical, and ontological dimensions of what it means to be with the dead. His phenomenological approach to key sources in a range of fields gives us a new perspective on the human sciences as a whole.
Visa hela texten

"This stunning book is unlike any other I have read on the topic of death. Hans Ruin's philosophical analysis does important work that previous books simply have not attempted or achieved. His investigation into what we do with the dead allows us to gain purchase on what is at stake in the disciplines of anthropology, sociology, literature, religion, and above all history."-Ethan Kleinberg, Wesleyan University "Hans Ruin's excellent book extends the phenomenology of death in new and interesting ways. His insights into the cultural significance of death, integrating it with the philosophical literature, make this a remarkable achievement."-James Risser, Seattle University "What is the historian's relationship to death? What does it mean to be with the dead: as their caretakers, keepers of their legacy, guardians of their afterlife? These are the questions at the center of Hans Ruin's highly original exploration of the connections between burial practices and historical writing. This beautifully written book is an example of interdisciplinarity at its best, combining deft philosophical argument with the insights of social and cultural history. It should provoke historians, especially, to think critically about the ethical, spiritual, and political stakes of the work they do."-Joan Wallach Scott, Institute for Advanced Study "Being with the Dead is beautifully written and offers interdisciplinary breadth and philosophical rigour on a subject that lies at the very core of memory studies."-Siobhan Kattago, Memory Studies "Being with the Dead [is] a work whose clarity, interdisciplinary prowess, and originality rank it among the best and most provocative philosophical works in the continental idiom in recent years."-Jason M. Wirth, Los Angeles Review of Books "Ruin's study offers a subtle yet by no means recondite project, broad and interdisciplinary in scope."-Babette Babich, History and Theory "Ruin's critique offers a compelling argument for the ways in which necropolitics reveal the othering practices and colonialist discourse of many disciplines in the academy."-Candi K. Cann, Journal of the American Academy of Religion "Ruin's book is... a well-written reading that seems incredibly worthwhile for historians. His thoughts about what it means 'to be with the dead' open the view to the fact that death and the deceased are playing a role in every area of society. This is supported above all by the logical structure and the clearly structured argumentation in the book. Numerous connectivities for further research are offered to the reader, through which the ontological, ethical and political dimensions of what it means to be with the dead can be explored. And, above all, Being with the Dead is a successful contribution to give the dead more space in the human sciences." -Ekkehard Coenen, Human Studies "In contemporary phenomenology, grief and death are growing areas: Ruin's interdisciplinary attempt to think of being-with as a being with the dead in a spectral community makes of his book a novel approach in this field. More generally, it is a fascinating reading for sociologists, historians and anyone interested in how the relation to the dead shapes the sense of history and of the community."-Manon Piette, Phenomenology and the Cognitive Sciences "One of the finest philosophical works in the Continental idiom in the last two decades."-Jason M. Wirth, Research in Phenomenology

Hans Ruin is Professor of Philosophy at Soedertoern University in Sweden.

Introduction 1. Thinking after Life: Historicity and Having-Been 2. Thanatologies: On the Social Meanings of Burial 3. Ancestrality: Ghosts, Forefathers, and Other Dead 4. Necropolitics: Contested Communities and Remains of the Dead 5. Ossuary Hermeneutics: Necropolitical Sites of Archaeology 6. Visiting the Land of the Dead: History as Necromancy 7. The Tomb of Metaphysics: Writing, Memory, and the Arts of Survival