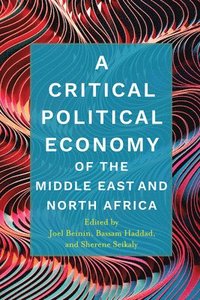 A Critical Political Economy of the Middle East and North Africa

av Joel Beinin, Bassam Haddad, Sherene Seikaly
Häftad Engelska, 2020-12-22
306
Köp
Spara som favorit
Finns även som
Visa alla 2 format & utgåvor
This book offers the first critical engagement with the political economy of the Middle East and North Africa. Challenging conventional wisdom on the origins and contemporary dynamics of capitalism in the region, these cutting-edge essays demonstrate how critical political economy can illuminate both historical and contemporary dynamics of the region and contribute to wider political economy debates from the vantage point of the Middle East. Leading scholars, representing several disciplines, contribute both thematic and country-specific analyses. Their writings critically examine major issues in political economy-notably, the mutual constitution of states, markets, and classes; the co-constitution of class, race, gender, and other forms of identity; varying modes of capital accumulation and the legal, political, and cultural forms of their regulation; relations among local, national, and global forms of capital, class, and culture; technopolitics; the role of war in the constitution of states and classes; and practices and cultures of domination and resistance. Visit politicaleconomyproject.org for additional media and learning resources.
Visa hela texten

"A thorough and timely collection of essays by some of the top practitioners of Middle East political economy, this book lays bare the human insecurity that is at the root of much of the discontent in the region." -- James Gelvin * University of California, Los Angeles * "This new canonical text will open pathways for research and make the job of educators infinitely easier by reasserting the enduring value of political economy. For too long scholarship has been enchanted by the shibboleths of orientalism and modernization theory-now there is a better way. A tour de force synthesis." -- Brandon Wolfe-Hunnicutt, California State University * Stanislaus *

Contents and AbstractsIntroduction: Introduction Joel Beinin chapter abstractThis volume seeks to stimulate a broad discussion on studying the Middle East and North Africa using the methods of political economy. Political economy addresses the mutual and historical constitution of states, markets, and classes. Its ambit also includes the legal, political, and cultural forms of the regulation of regimes of capital accumulation; relations among local, national, and global forms of capital, class, and culture; the social structure of reproduction, the construction of forms of knowledge and hegemony; technopolitics; the environment as both a resource and field of contestation; the role of war in the constitution of states and classes; and practices and cultures of domination and resistance. The historical development of social formations dominated by capital is inextricably intertwined with 1Landed Property, Capital Accumulation, and Polymorphous Capitalism: Egypt Kristen Alff chapter abstractThis chapter argues for a political economic and a cultural definition of capitalism. Capitalism in Egypt and the Levant, as part of the global capitalist system, was marked by institutions approximating private property, free wage labor, capital accumulation, and modern rationality. Using this definition and analyzing the processes that produced globally recognizable institutions as well as local differences, the chapter argues that foundations in tax-farming, industry, and urbanization laid in the early modern period produced specific differential results in the nineteenth and early twentieth centuries: wage labor and private property in Egypt, and sharecropping in the Levant. Canonized during World War I, both property and labor regimes rested on the objectification and depersonalization of laborer and company as opposed to the more interpersonal dependencies of the early modern period. 2State, Market, and Class: Egypt, Syria, and Tunisia Max Ajl, Bassam Haddad, and Zeinab Abul-Magd chapter abstractThis chapter analyzes colonial and postcolonial development in Egypt, Syria, and Tunisia. These three republics had different patterns of colonial intervention, yet shared a relatively similar postcolonial development path. Each carried out marked changes in the institutional framework or ownership of land during the statist/socialist period, and each suffered from degrees of agrarian counterrevolutions during the 1980s or 1990s. All had heavily invested in import-substitution industrialization and opened up to foreign capital. All three cases had a state that heavily regulated production and consumption, and each experienced subsequent levels of state retreat from the economic sphere in favor of the private sector. In charting the rise and fall of developmentalism in each of the three republics, the chapter demonstrates that development is a global process conditioned, but not determined, by external forces, and whose rise and fall casts light on the longue duree of regional underdevelopment. 3Ten Propositions on Oil Timothy Mitchell chapter abstractOil seems to dictate the terms with which we think about it. Since capitalism depends on it, we assume, supplies of oil have to be continually secured, bringing repeated risks of conflict and war. This energy determinism grants too much power to oil and often says little about oil itself-how it is produced, shipped, and used, and by whom. The first nine propositions outline alternative ways to approach the historical political economy of oil. The tenth asks how we can approach this subject in the face of catastrophic climate change. This is not a question of how history shapes our understanding of oil, but how oil has shaped our understanding of history. 4Regional Militaries and the Global Military-Industrial Complex Shana Marshall chapter abstractThe military, as both a political and an economic actor, has figured prominently in the region's development history. Many of the region's fu