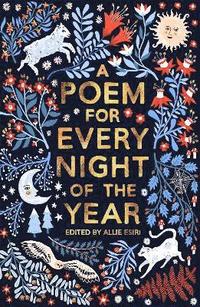 A Poem for Every Night of the Year

av Allie Esiri, Allie Esiri
Inbunden Engelska, 2016-09-08
254
Köp
Spara som favorit
A Poem For Every Night of the Year is a magnificent collection of 366 poems compiled by Allie Esiri, one to share for every night of the year. The poems - together with introductory paragraphs - have a link to the date on which they appear. Shakespeare celebrates midsummer night, Maya Angelou International Women's Day and Lewis Carroll April Fool's day. Perfect for reading aloud and sharing with all the family, it contains a full spectrum of poetry from familiar favourites to exciting contemporary voices. Alfred, Lord Tennyson, W. B. Yeats, A. A. Milne and Christina Rossetti sit alongside Roger McGough, Carol Ann Duffy and Benjamin Zephaniah. This soul-enhancing book is the perfect gift that will last the whole year, with a little bit of magic to read every evening.
Visa hela texten

This book will bring a little magic into your day and into your heart. * Helena Bonham Carter * Allie Esiri's delightfully eclectic anthology takes you on a poetic journey through every night of the calendar year. A fun book for all the family to enjoy. * Tatler * Verse from ancient times to the present to soothe the spirit at the end of a fractious day. * You Magazine * If you've had one of those days and feel too tired for a whole chapter before bed, why not try a poem instead? This wonderful collection shares a poem for every night throughout the year and includes writers from Shakespeare to Maya Angelou. One to keep beside your bed * Stylist *

Allie Esiri, described in a Tatler profile as 'a poetry powerhouse', is a former English stage, film and television actress, now a writer. Her iF Poems app was launched to great acclaim and was the Apple Editors' Choice All Time Favourite app. iF: A Treasury of Poems for Almost Every Possibility was published in 2012 and The Love Book in 2014. Her poetry compilations A Poem for Every Day of the Year and A Poem for Every Night of the Year were best books of the year in The Times, The New Statesman and The Observer. She has hosted poetry events at The Times and the Sunday Times Cheltenham Literature Festival, The Sunday Times Festival of Education and The Oldie Soho Literary Festival. Zanna Goldhawk creates her illustrations from her seaside cottage in Cornwall. She takes huge inspiration from nature and animals, and has a mild obsession with colour and pattern (and coffee). Zanna studied illustration at the University of Gloucestershire, where she started her illustrated gifts and stationery business Papio Press with her husband. Now she splits her time between designing beautiful products and illustrating gorgeous books.