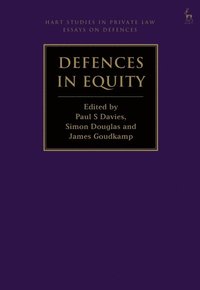 av Davies Paul S Davies, Douglas Simon Douglas, Goudkamp James Goudkamp
E-bok (PDF - DRM), Engelska, 2018-05-03
649
Ladda ned
Spara som favorit
Laddas ned direkt
Läs i vår app för iPhone, iPad och Android
Finns även som
Visa alla 3 format & utgåvor
This book is the fourth in a series of essay collections on defences in private law. It addresses defences to liability arising in equity. The essays range from those adopting a mainly doctrinal perspective to others that explore the law from a more philosophical perspective. Some essays concentrate on specific defences, while others are concerned with the links between defences, or with how defences relate to the structure of the law of equity generally. One aim of the book is to shed light on equitable doctrines by analysing them through the lens of defences. The essays offer original contributions to this complex, important but neglected field of scholarly investigation. The contributors judges, practitioners and academics are all distinguished jurists. The essays are addressed to all of the major common law jurisdictions.
Visa hela texten