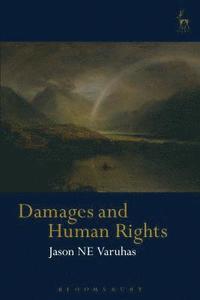 av Professor Jason Ne Varuhas
Häftad Engelska, 2018-11-01
709
Köp
Spara som favorit
Finns även som
Visa alla 3 format & utgåvor
Winner of the 2018 Inner Temple New Authors Book Prize and the 2016 SLS Peter Birks Prize for Outstanding Legal Scholarship. Damages and Human Rights is a major work on awards of damages for violations of human rights that will be of compelling interest to practitioners, judges and academics alike. Damages for breaches of human rights is emerging as an important and practically significant field of law, yet the rules and principles governing such awards and their theoretical foundations remain underexplored, while courts continue to struggle to articulate a coherent law of human rights damages. The book's focus is English law, but it draws heavily on comparative material from a range of common law jurisdictions, as well as the jurisprudence of international courts. The current law on when damages can be obtained and how they are assessed is set out in detail and analysed comprehensively. The theoretical foundations of human rights damages are examined with a view to enhancing our understanding of the remedy and resolving the currently troubled state of human rights damages jurisprudence. The book argues that in awarding damages in human rights cases the courts should adopt a vindicatory approach, modelled on those rules and principles applied in tort cases when basic rights are violated. Other approaches are considered in detail, including the current 'mirror' approach which ties the domestic approach to damages to the European Court of Human Rights' approach to monetary compensation; an interest-balancing approach where the damages are dependent on a judicial balancing of individual and public interests; and approaches drawn from the law of state liability in EU law and United States constitutional law. The analysis has important implications for our understanding of fundamental issues including the interrelationship between public law and private law, the theoretical and conceptual foundations of human rights law and the law of torts, the nature and functions of the damages remedy, the connection between rights and remedies, the intersection of domestic and international law, and the impact of damages liability on public funds and public administration. The book was the winner of the 2016 SLS Peter Birks Prize for Outstanding Legal Scholarship and the 2018 Inner Temple New Authors Book Prize.
Visa hela texten

Public lawyers and private lawyers (if that distinction has real meaning), human-rights lawyers and legal theorists, and everyone with an interest in having a principled regime for making ubi ius, ibi remedium a practical reality, will find much food for thought in the book; even those who reject the conclusions will benefit from having to confront the manifest strengths of the argument. The book will quickly become the standard point of reference in its field. It is a pleasure to congratulate Dr Varuhas on this sustained, intellectually powerful and practically important piece of legal scholarship, and to commend it to the many readers, in many parts of the world, where it will, I hope, stimulate new approaches to the practice and theory of the subject. * From the Foreword by Professor David Feldman QC (Hon) FBA, Rouse Ball Professor of English Law, University of Cambridge * a significant work of original scholarship (...) I cannot help but to have the feeling that the book is destined to be instrumental in changing the perception of human rights as lying in a realm of public law, and of tort as lying in a separate realm of private law (...) On any view, this is a book that is likely to be read, widely and often. -- Justice Gageler, High Court of Australia * Public Law Review * ...a thought-provoking book which represents a valuable contribution to legal scholarship. It treats a subject of significance to lawyers, to judges and, most importantly, to those who wish to use the law to protect and vindicate their human rights. -- Matthew S R Palmer, Judge of the High Court of New Zealand * Modern Law Review * Varuhas cites several cases which I decided at first instance. If I had had the benefit of some of his arguments, I might have made different decisions in some of those cases, and given better reasons in others. Any advocate or court considering these arguments will be greatly indebted to this scholarly, comprehensive and thoughtful work. -- Michael Tugendhat, formerly one of Her Majesty's Justices * Cambridge Law Journal *

Jason NE Varuhas is a Professor of Law at the University of Melbourne. He is also an Associate Fellow of the University of Cambridge Centre for Public Law. He was formerly Senior Lecturer, University of New South Wales, Junior Research Fellow, Christ's College and Affiliated Lecturer, Faculty of Law, University of Cambridge. He has published widely in the fields of public law, tort law and remedies, and his work has been cited by courts in the UK, Australia and New Zealand. His book Damages and Human Rights (Hart 2016) was awarded the 2016 UK Society of Legal Scholars Peter Birks Prize for Outstanding Legal Scholarship and the 2018 Inner Temple New Authors Book Prize.