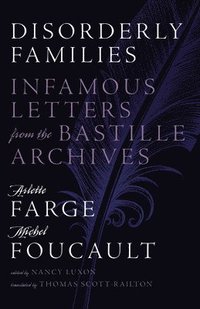 Infamous Letters from the Bastille Archives

av Arlette Farge, Michel Foucault, Nancy Luxon
Häftad Engelska, 2021-12-21
294
Köp
Spara som favorit
Finns även som
Visa alla 1 format & utgåvor
The first English translation of letters of arrest from eighteenth century France held in the archives of the Bastille Drunken and debauched husbands; libertine wives; vagabonding children. These and many more are the subjects of requests for confinement written to the king of France in the eighteenth century. These letters of arrest (lettres de cachet) from France's Ancien Regime were often associated with excessive royal power and seen as a way for the king to imprison political opponents. In Disorderly Families, first published in French in 1982, Arlette Farge and Michel Foucault collect ninety-four letters from ordinary families who, with the help of hired scribes, submitted complaints to the king to intervene and resolve their family disputes. Gathered together, these letters show something other than the exercise of arbitrary royal power, and offer unusual insight into the infamies of daily life. From these letters come stories of divorce and marital conflict, sexual waywardness, reckless extravagance, and abandonment. The letters evoke a fluid social space in which life in the home and on the street was regulated by the rhythms of relations between husbands and wives, or parents and children. Most impressively, these letters outline how ordinary people seized the mechanisms of power to address the king and make demands in the name of an emerging civil order. Arlette Farge and Michel Foucault were fascinated by the letters' explosive qualities and by how they both illustrated and intervened in the workings of power and governmentality. Disorderly Families sheds light on Foucault's conception of political agency and his commitment to theorizing how ordinary lives come to be touched by power. This first English translation is complete with an introduction from the book's editor, Nancy Luxon, as well as notes that contextualize the original 1982 publication and eighteenth-century policing practices.
Visa hela texten

"Expertly edited, this thoughtful translation of Disorderly Families adds a central pillar to the English archive of Michel Foucault's work. A source of fascination for him since at least the 1950s, the Bastille lettres de cachets deeply influenced and shaped his analysis of power. As he discovered, these letters were what he and Arlette Farge would call a 'popular practice,' demanded from below, and not an arbitrary exercise of monarchical power-and they would become a key building block for Foucault's theory of power-knowledge. This exceptional English translation gives life to Foucault's-and Farge's-subversive desire to breathe life into these beautiful, infamous, and obscure lives."-Bernard E. Harcourt, Columbia University "An enlightening compilation that will leave historically inclined readers wanting to dig a little further into the archives."-Kirkus Reviews "Thirty-five years on, the study of obscure individual lives has become a valued feature of historical research and the source of new perspectives in the understanding of social and political contexts. [But quite apart from this change in the attitude of historians], the letters themselves seem to have aged better than the intellectual disagreements and academic disputes that accompanied their original publication."-Times Literary Supplement

Arlette Farge is Director of Research in Modern History at the Centre National de la Recherche Scientifique, Paris and the author of more than a dozen books, including Fragile Lives and The Allure of the Archive. Michel Foucault (1926-1984) was a French philosopher and held the Chair in the History of Systems of Thought at the College de France. He is often considered the most influential political theorist of the second half of the twentieth century. His most notable works include History of Madness, Discipline and Punish, and The History of Sexuality, among others. Nancy Luxon is associate professor of political science at the University of Minnesota. She is the author of Crisis of Authority: Politics, Trust,and Truth-Telling in Freud and Foucault. Thomas Scott-Railton is a freelance French-English translator living in Brooklyn, New York, and previously translated Arlette Farge's The Allure of the Archive.

Contents Translator's Preface Editor's Introduction Presentation The King's Orders At the Family's Request 1728-1758: A Survey 1. Marital Discord Putting and End to One's Misery The Pact Broken Debauch: Masculine Spaces, Feminine Spaces The Gaze of Others The Imprisonment Obtained or the Beginning of a Story Obscure "Police Clarifications" The Singular Status of Repentance Documents 1. Marital Discord Households in Ruin The Imprisonment of Wives The Debauch of Husbands The Tale of a Request 2. Parents and Children Conflicts of Interest Disturbance "Conflicts at the Threshold" Departure for the Islands The Honor of Families Parental Ethics Documents 2. Parents and Children The Disruption of Affairs Shameful Concubinage The Dishonor of Waywardness Domestic Violence Bad Apprentices Exiles Family Honor The Parental Ethos of 1728: The Importance of Sentiment The Parental Ethos of 1758: The Duty to Educate 3. When Addressing the King From Use to Abuse Representation and Secrecy The End of Lettres de Cachet Afterword Arlette Farge Notes Index to Names Index to Places