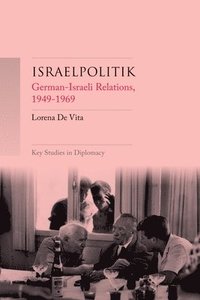 av Lorena De Vita
Inbunden Engelska, 2020-08-25
1192
Köp
Spara som favorit
Finns även som
Visa alla 3 format & utgåvor
The rapprochement between Germany and Israel in the aftermath of the Holocaust is one of the most striking political developments of the twentieth century. German Chancellor Angela Merkel recently referred to it as a 'miracle'. But how did this 'miracle' come about? In this book, Lorena De Vita traces the contradictions and dilemmas that shaped the making of German-Israeli relations at the outset of the global Cold War. Examining well known events like the Suez Crisis, the Eichmann Trial, and the Six-Day War, the book adopts a 'pericentric' perspective on the Cold War era, drawing attention to the actions and experiences of minor players within the confrontation and highlighting the consequences of their political calculations. Israelpolitik takes two of the most interesting dimensions of the Cold War - the German problem and the Middle East conflict - and weaves them together, providing a bipolar history of German-Israeli relations in the aftermath of the Holocaust. Drawing upon sources from both sides of the Iron Curtain and of the Arab-Israeli conflict, the book offers new insights not only into the early history of German-Israeli relations, but also into the dynamics of the Cold War competition between the two German states, as each attempted to strengthen its position in the Middle East and in the international arena while struggling with the legacy of the Nazi past. -- .
Visa hela texten

'A fresh, exceptionally well-researched perspective on Cold War diplomacy [.] Israelpolitik is a remarkably nuanced work that will shape future scholarship not only on German-Israeli relations, but also on the history of modern Germany itself.' Kirkus Reviews 'Setting out to reassess the relations of both East and West Germany with Israel in a formative period (1949-1969), Lorena De Vita produced an engaging monograph that is unafraid to challenge official rhetoric about the genesis and development of that emotionally fraught history.' Guy Laron, The Hebrew University of Jerusalem, Journal of Strategic Studies '[A] deft and original study [.] Israelpolitik provides much new information on the two Germanys' diplomatic tactics and strategies towards Israel and the Arab world. De Vita's scrupulous analysis of the strains of German-Israeli reconciliation represents a model treatment of a complex Cold War subject.' Carole Fink, Humanities Distinguished Professor, University of Ohio, German History 'This book is an incredibly nuanced investigation of the inter-German rivalry in the Middle East that serves to illustrate the multifaceted complexity of the global Cold War. It is an important, timely contribution to the growing literature on regional and local cold wars that highlights the agency of middle powers, in this case East and West Germany. A must-read for anyone interested in the history of the German Cold War, German-Israeli ties, and the politics of memory.' Sergey Radchenko, Professor of International Relations, Cardiff University 'At long last - a book about German-Israeli relations that reaches beyond the conventional story. The reader is exposed to the complex interplay between the cold war, the rivalry between the two Germanies, the conflict in the Middle-East, the tensions within the West-German-East-German-Israeli triangle and the role collective memory plays in politics.' Moshe Zimmermann, Professor Emeritus, The Hebrew University of Jerusalem 'By recasting West German-Israeli relations against the backdrop of relentlessly opportunistic East German pressures, De Vita brings fresh and significant insights to such milestones as the Luxembourg Agreements, the Suez Crisis, Adenauer's meeting with Ben Gurion, and the Eichmann trial. This is finely textured international history at its best.' William Glenn Gray, author of Germany's Cold War 'De Vita bases her monograph on a wide array of primary sources[.] [...] One would be hard-pressed to find another study of the German-Israeli question in the English language that is supported by such a vast array of primary materials.' Jacob Tovy, Researcher, Herzl Institute, University of Haifa, Central European History '[Israelpolitik] analyzes the legacy and management of the Nazi past which leads to two inverted positions, in a mirror relationship which opposed each of the two German states to its alter ego and to the other [Cold War] camp' Dominique Trimbur, Fondation pour la Memoire de la Shoah, Relations Internationales '[Israelpolitik] is simply good history that politely transcends self-serving mythologies.' Daniel Marwecki, author of Germany and Israel: Whitewashing and Statebuilding, European Review of History: Revue Europeenne d'Histoire 'An impressive portrait of the triangular constellation between the Federal Republic, the GDR and Israel.' Joseph Ben Prestel, Freie Universitat Berlin, H-Soz-Kult 'In their policy towards Israel, the two German states carried out their ideological conflict [.] on the political stage of international relations. This has always been about coming to terms with the National Socialist past. Lorena De Vita shows [this] in an impressive way.' Sybille Steinbacher, Director of the Fritz Bauer Institute, Professor of the History and Impact of the Holocaust, Goethe University Frankfurt am Main -- .

Lorena De Vita is Assistant Professor of the History of International Relations at Utrecht University -- .