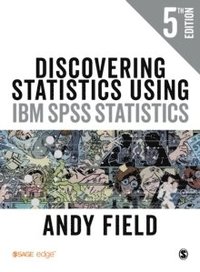 All the online resources above (video, case studies, datasets, testbanks) can be easily integrated into your institution's virtual learning environment or learning management system. This allows you to customize and curate content for use in module preparation, delivery and assessment.

Please note that ISBN: 9781526445780 comprises the paperback edition of the Fifth Edition and the student version of IBM SPSS Statistics.
Visa hela texten

This book turned my hatred of stats and SPSS into love.

I love it! It's the first text I've come across that has been written in such a captivating way. There's humor, tons of information, and awesome resources both within and on the companion website. Kudos to Prof. Field!

Harvard University I also appreciate how the author made the text interesting to read, but the content is rich enough to provide readers good knowledge on how to draw insights from stats and data. Also, it provides a lot of practical guides for reporting results and findings for research paper. Can't wait to take a deeper dive into the text

I never thought I would find a statistics textbook amusing but somehow our text pulls it off. I also appreciated the online supplementary tools provided by the publisher. They provide a good synthesis of each of the chapters and some easy options to review

I really really love the book, it's the main reason why I'm not curled up in bed with my cats sobbing in fear at the moment. Speaking of cats, I gotta say the correcting cat/misconception mutt framing is very cute, and it almost broke my heart finding out the origin of that orange spiritual feline. I'm having a blast reading about stats, who would've thunk it?

I am enjoying the book, which I would never have imagined! I am not afraid of statistics anymore.

Andy Field is Professor of Quantitative Methods at the University of Sussex. He has published widely (100+ research papers, 29 book chapters, and 17 books in various editions) in the areas of child anxiety and psychological methods and statistics. His current research interests focus on barriers to learning mathematics and statistics.

He is internationally known as a statistics educator. He has written several widely used statistics textbooks including Discovering Statistics Using IBM SPSS Statistics (winner of the 2007 British Psychological Society book award), Discovering Statistics Using R, and An Adventure in Statistics (shortlisted for the British Psychological Society book award, 2017; British Book Design and Production Awards, primary, secondary and tertiary education category, 2016; and the Association of Learned & Professional Society Publishers Award for innovation in publishing, 2016), which teaches statistics through a fictional narrative and uses graphic novel elements. He has also written the adventr and discovr packages for the statistics software R that teach statistics and R through interactive tutorials.

His uncontrollable enthusiasm for teaching statistics to psychologists has led to teaching awards from the University of Sussex (2001, 2015, 2016, 2018, 2019), the British Psychological Society (2006) and a prestigious UK National Teaching fellowship (2010).

He's done the usual academic things: had grants, been on editorial boards, done lots of admin/service but he finds it tedious trying to remember this stuff. None of them matter anyway because in the unlikely event that you've ever heard of him it'll be as the 'Stats book guy'. In his spare time, he plays the drums very noisily in a heavy metal band, and walks his cocker spaniel, both of which he finds therapeutic.