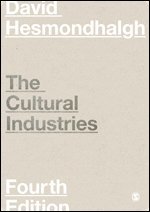 Bringing together a huge range of research, theory and key concepts, David Hesmondhalgh provides an accessible yet critical exploration of cultural production and consumption in the global media landscape. This new edition:  As one of the most read, most studied and most cited books in the field, this Fourth Edition is an essential resource for students and researchers of media and communication studies, the cultural and creative industries, cultural studies and the sociology of the media.
Visa hela texten

Hesmondhalgh has done all students of media and communication a great service by updating this book, which offers a necessary and comprehensive map of the world of cultural industries. It is an indispensable resource for researchers and students across the world.

Hesmondhalgh has done the impossible - a phenomenal new edition that grapples with some of the biggest issues, major transformations and important continuities in the cultural industries to date. From political economics of neoliberalism to organisational business strategies; from sociocultural change through to technological impact this book digs deep into the relationship  between power, culture and production and shows us yet again why culture and the cultural industries really do matter. It's a tour de force written with style and packed with substance - a book that every media studies student and scholar should read at least once!


The Cultural Industries is one of those rare books that is accessible to students and essential for scholars. Hesmondhalgh integrates an analysis of both the changes and continuities within cultural industries in a way that is far too rare in scholarship in this field.

A masterful text that lays out the intellectual foundation for the contemporary study and understanding of cultural industries. Thoroughly updated, this edition maintains its original framework and reflects the expanding boundaries of its subject matter to consider both new digital industries and the extension of existing media industries into internet distribution.

The publication of the 4th edition of The Cultural Industries reminds us just how important this book has been over the last decade and a half. In a period of great turbulence and far reaching transformations, we have had an almost 'real-time' charting of these industries across a vast literature, from frothily optimistic to dour doom-mongering. This edition brings us up to date, with important additions on 'digital' disruption and on the rise of China. As always, Hesmondhalgh shows us the long term continuities in the industries and, more importantly, what is at stake in the production and circulation of the meanings by which we make sense of the world.

David Hesmondhalgh is Professor of Media, Music and Culture in the School of Media and Communication at the University of Leeds. He is the author of The Cultural Industries (SAGE, 2019); Culture, Economy and Politics: The Case of New Labour (Palgrave, 2015, co-written with Kate Oakley, David Lee and Melissa Nisbett); Why Music Matters (Wiley-Blackwell, 2013); and Creative Labour: Media Work in Three Cultural Industries (Routledge, 2011, co-written with Sarah Baker). He is also editor or co-editor of eight other books or special journal issues on media, music and culture, including a special issue of Popular Communication (co-edited with Anamik Saha) on Race and Cultural Production; The Media and Social Theory (Routledge, co-edited with Jason Toynbee, 2008) and Media and Society, 6th edition (Bloomsbury, co-edited with James Curran, 2019). He was born and raised in Accrington, Lancashire, did his first degree in English Language and Literature at the University of Oxford, and received his PhD from Goldsmiths University of London in 1996. He lives in Yorkshire with his partner, the philosopher Helen Steward, and they have two adult children, Rosa and Joe.