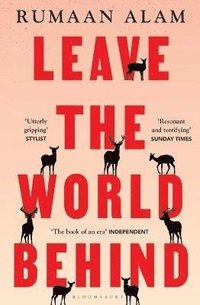 Leave the World Behind

'The book of an era' Independent

av Rumaan Alam
(2 röster)
Häftad Engelska, 2021-06-01
134
Köp
Spara som favorit
Finns även som
Visa alla 2 format & utgåvor
*A THE TIMES #1 BESTSELLER* *THE NEW YORK TIMES BESTSELLER* *A BARACK OBAMA SUMMER READING PICK 2021* 'Easily the best thing I have read all year' KILEY REID, AUTHOR OF SUCH A FUN AGE 'Intense, incisive, I loved this and have still not quite shaken off the unease' DAVID NICHOLLS 'I was hooked from the opening pages' CLARE MACKINTOSH 'Simply breathtaking . . . An extraordinary book, at once smart, gripping and hallucinatory' OBSERVER _______ A magnetic novel about two families, strangers to each other, who are forced together on a long weekend gone terribly wrong Amanda and Clay head to a remote corner of Long Island expecting a holiday: a quiet reprieve from life in New York City, quality time with their teenage son and daughter and a taste of the good life in the luxurious home they've rented for the week. But with a late-night knock on the door, the spell is broken. Ruth and G. H., an older couple who claim to own the home, have arrived there in a panic. These strangers say that a sudden power outage has swept the city, and - with nowhere else to turn - they have come to the country in search of shelter. But with the TV and internet down, and no phone service, the facts are unknowable. Should Amanda and Clay trust this couple - and vice versa? What has happened back in New York? Is the holiday home, isolated from civilisation, a truly safe place for their families? And are they safe from one another? _______ SOON TO BE A MAJOR GLOBAL NETFLIX ADAPTATION STARRING DENZEL WASHINGTON AND JULIA ROBERTS FINALIST FOR THE NATIONAL BOOK AWARD 2020 FINALIST FOR THE ORWELL PRIZE 2021 A DAILY TELEGRAPH, GUARDIAN, OBSERVER, IRISH TIMES AND TIME BOOK OF THE YEAR Everyone is talking about LEAVE THE WORLD BEHIND 'You will probably need to read it in as close to one sitting as possible' Sunday Times 'A page-turner taking in themes of isolation, race and class' Guardian 'A book that could have been tailor-made for our times' The Times 'A literary page-turner that will keep you awake even after it ends' Mail on Sunday 'An exceptional examination of race and class and what the world looks like when it's ending' Roxane Gay 'A thrilling book - one that will speak to readers who have felt the terror of isolation in these recent months and one that will simultaneously, as great books do, lift them out of it' Vogue 'Explores complex ideas about privilege and fate with miraculous wit and grace' Jenny Offill 'For the reader, the invisible terror outside in Leave the World Behind echoes the sense of disquiet today in a world convulsed by the pandemic' Financial Times 'Alam's achievement is to see that his genre's traditional arc, which relies on the idea of aftermath, no longer makes sense. Today, disaster novels call for something different' New Yorker 'Read it with the lights on' Jenna Bush Hager, October Book Club pick
Visa hela texten

Stupendously good . . . Simply breathtaking, full of moments of exquisite recognition, as terrifying and prescient as Cormac McCarthy's The Road . . . Leave the World Behind is an extraordinary book, at once smart, gripping and hallucinatory . . . When future generations (if that term doesn't sound over-optimistic at the moment) want to know what it was like to live through the nightmare of 2020, this is the novel they'll reach for * Observer * Would be resonant and terrifying even in a more normal year . . . In his dazzling prose, his fascination with catastrophe and his apparent ability to portend the future, Alam is a worthy descendant of Don DeLillo . . . You will probably need to read it in as close to one sitting as possible * Sunday Times * A sensation . . . A tense, atmospheric, splendidly written attempt to grapple with impending doom ... Even in its infancy, Leave the World Behind was well poised to become the book of an era . . . A striking, unsettling novel * Independent * Without any exaggeration, I can honestly say that I devoured Leave the World Behind, in one greedy, uneasy gulp. It's a taut page-turner - one that starts out as a smart, knowing, contemporary comedy of manners, but quickly spirals into an apocalyptic nightmare so terrifyingly realistic that it sent shivers down my spine * Daily Telegraph * For the reader, the invisible terror outside in Leave the World Behind echoes the sense of disquiet today in a world convulsed by the pandemic. There are intense parallels between the unreality of life in the Long Island bolt-hole described in the book and lockdown . . . The novel excels in its dissection of modern liberal America and forces the reader to confront the limits of their own heroism in the face of disaster * Financial Times * A book that could have been tailor-made for our times, with its tale of racial tensions and an unnatural disaster . . . It's a close-up narrative, and its strength lies in the emotional pull . . . There's something for everyone: that is, to terrify everyone, from parents to nature lovers to hypochondriacs * The Times * A page-turner, taking in themes of isolation, race and class . . . As the author of a book about people trapped inside a house by a huge event, desperate for information, Alam is a curious prophet . . . Alam has an almost anthropological eye for the absurdities of the upper-middle class, for the blindness of white people . . . Leave the World Behind was influenced by Jordan Peele's film Get Out, apparent in Alam's acuity on whiteness. But the closest literary comparison could be Shirley Jackson, whose cold, detached voice can be heard in Alam's narrator when we are shown glimpses of what is happening in the wider world * Guardian * Rumaan Alam creates an atmosphere of dread so convincing and prescient that it stays with the reader long after reading . . . Explores issues of race, class and identity in the face of overwhelming disaster * Irish Times * Alam has built an apocalyptic thriller around a single concept: what would you do if the world was crumbling around you? . . . This novel is catching hold of its readers, and it's easy to see why . . . A bracing read. The story is crafted with a deft lightness of touch and, at a mere 240 pages, it's brisk and unfaltering. But it's the eeriness of the burgeoning apocalypse, and the paralytic inability of the protagonists to help themselves, that will stay with you the longest * Irish Independent * An exacting and dread-inducing story of suspicion, prejudice and hysteria . . . It feels so entwined with the DNA of 2020, capturing the hallucinatory quality which time takes on when stuck inside not knowing what the future holds * Esquire * Once you read this topical and gripping novel, it's all you'll want to talk about * Stylist * Rumaan Alam's elegant novel presents a scenario familiar to many readers of contemporary fiction in 2020: a mass power meltdown . . . Alam controls the tension by almost imperceptible degree

Rumaan Alam is the author of Rich and Pretty and That Kind of Mother. His writing has appeared in the New York Times, Elle, New York Magazine, the Los Angeles Review of Books, the Wall Street Journal, The Rumpus, Buzzfeed, and elsewhere. He studied at Oberlin College, and lives in Brooklyn, New York.