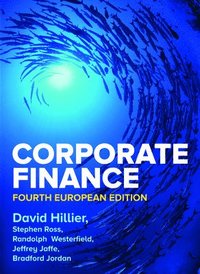 av David Hillier
Häftad Engelska, 2020-01-29
Studentlitteratur
725
Köp
Spara som favorit
Kan levereras innan julafton!
The fourth edition of Corporate Finance takes an applied approach to cover all the latest research and topic areas important to students taking Finance courses. The new edition provides an international perspective on all areas of corporate finance and has been updated to include discussion on current trends such as the rise of populism and trade barriers on international finance, the advent of Financial Technology, and key regulatory changes impacting the sector.

Understanding and Application
Clear, user-friendly style
example boxes in every chapter provide hypothetical examples to illustrate theoretical concepts such as cash flow timing, dividend smoothing and differential growth.
real world insight boxes use real companies like Siemens, Avast and Adidas to show how they have applied corporate finance theories and concepts to their businesses and business decisions.
chapter links in the margin provide quick cross-referencing to show students the connections between topics.

Practice and Proficiency
mini and practical cases present scenarios and questions to practice applying what you have learnt.
Rigorous testing: between 30 and 40 questions and problems per chapter are categorised by topic and level of difficulty.
numbered maths equations and key notation boxes listing the variables and acronyms that will be encountered in each chapter, designed to encourage mastery of Maths.
exam questions designed to take 45 minutes and test you on material learned in a more formal exam style.
Connect resources include algorithmic questions designed to ensure equations and calculations are not learned by rote but by thorough understanding and practice

NEW: This edition has now been updated with 8 new videos that covers a worked example from the text and each video has associated concept check questions. The videos are now available on connect...
Visa hela texten

David Hillier is Professor of Finance at the University of Strathclyde, teaches regularly in development programs for executives and has taught courses for a wide variety of professional clients, including the World Bank and the National Health Service in the UK. It is part of the editorial board of several international journals of finance.

The late Stephen A. Ross was the Franco Modigliani Professor of Finance and Economics at the Sloan School of Management, Massachusetts Institute of Technology. One of the most widely published authors in finance and economics, Professor Ross was known for his work in developing the Arbitrage Pricing Theory as well as his substantial contributions to the discipline through his research on signaling, agency theory, option pricing, and the theory of the term structure of interest rates, among other topics. A past president of the American Finance Association, he also served as an associate editor of various academic and practitioner journals. He was a trustee of CalTech.

Randolph W. Westerfield is Dean Emeritus and the Charles B. Thornton Professor in Finance Emeritus at the University of Southern Californias Marshall School of Business. Professor Westerfield came to USC from the Wharton School, University of Pennsylvania, where he was the chairman of the finance department and a member of the finance faculty for 20 years. He is a member of the board of trustees of Oaktree Capital mutual funds. His areas of expertise include corporate financial policy, investment management, and stock market price behavior.

Jeffrey F. Jaffe has been a frequent contributor to finance and economic literature in such journals as the Quarterly Economic Journal, The Journal of Finance, The Journal of Financial and Quantitative Analysis, The Journal of Financial Economics, and The Financial Analysts Journal . His best-known work concerns insider trading, where he showed both that corporate insiders earn abnormal profits from their trades and that regulation has little effect on these profits. He has also made contributions concerning initial public offerings, the regulation of utilities, the behavior of market makers, the fluctuation of gold prices, the theoretical effect of inflation on the interest rate, the empirical effect of inflation on capital asset prices, the relationship between small-capitalization stocks and the January effect, and the capital structure decision.

Bradford D. Jordan is Visiting Scholar in the Warrington College of Business at the University of Florida. He previously held the duPont Endowed Chair in Banking and Financial Services at the University of Kentucky, where he was department chair for many years. Professor Jordan has published numerous articles in top journals on issues such as cost of capital, capital structure, and the behavior of security prices. He is a past president of the Southern Finance Association, and he is coauthor of Fundamentals of Investments: Valuation and Managem...