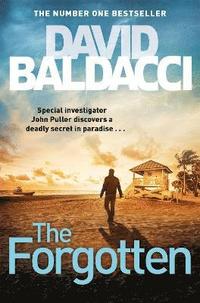 av David Baldacci
Häftad Engelska, 2019-04-04
131
Köp
Spara som favorit
Finns även som
Visa alla 1 format & utgåvor
The second title in David Baldacci's bestselling series, The Forgotten is a fast-paced action thriller, featuring the hero of Zero Day - John Puller. Criminal investigator John Puller is drawn closer to home when his aunt is found dead in her house in Paradise, Florida. The local police have ruled the death as an accident, but Puller finds evidence to suggest that she may well have been murdered. On the surface the town lives up to its name, but as Puller digs deeper he realizes that this town and its inhabitants are more akin to Hell than Paradise. His belief is confirmed as evidence of strange and inexplicable events come to light. And when Puller learns the truth about what is happening in this once sleepy town, he knows that his discoveries will impact far wider than Paradise.
Visa hela texten

The page-turner of the season * The Times * One of the world's biggest-selling thriller writers, Baldacci needs no introduction . . . Brilliant plotting, heart-grabbing action and characters to die for * Daily Mail * Baldacci inhabits the skin of his creations - tripping us up with unexpected empathy and subtle identification * Sunday Express *

David Baldacci is one of the world's bestselling and favourite thriller writers. With over 130 million copies in print, his books are published in over eighty territories and forty-five languages, and have been adapted for both feature-film and television. He has established links to government sources, giving his books added authenticity. David is also the co-founder, along with his wife, of the Wish You Well Foundation (R), a non-profit organization dedicated to supporting literacy efforts across the US. Trust him to take you to the action.