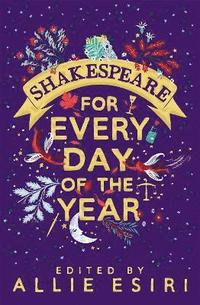 Shakespeare for Every Day of the Year

Allie Esiri, described in a Tatler profile as 'a poetry powerhouse', is a former English stage, film, and television actress, now a writer. Her iF Poems app was launched to great acclaim in November 2011 and was the Apple Editors' Choice All Time Favourite app. iF: A Treasury of Poems for Almost Every Possibility was published in 2012 and The Love Book in 2014. Her collection A Poem for Every Night of the Year was a phenomenal success with rave reviews and her next collection A Poem for Every Day of the Year is just as thoughtful and inspiring. Allie also organizes and hosts live poetry events and is on the advisory board for the Cheltenham Festival. A thousand people attended her event at the National Theatre!