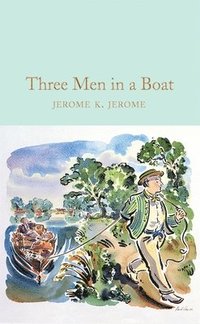 Three Men in a Boat

av Jerome K Jerome
(1 röst)
Inbunden Engelska, 2020-07-09
116
Köp
Spara som favorit
Finns även som
Visa alla 6 format & utgåvor
Complete and unabridged. Three Men in a Boat remains one of the best-loved and most entertaining comic novels. Part of the Macmillan Collector's Library; a series of stunning, clothbound, unabridged, pocket sized classics with gold foiled edges and ribbon markers. These beautiful books make perfect gifts or a treat for any book lover. This edition features illustrations by A. Frederics and an afterword by David Stuart Davies. Join our young heroes J., George and Harris (not forgetting Montmorency, the mischievous, irascible fox terrier) as they take a boating holiday along the Thames. Their aim is to escape the weary workaday world and improve their health, but they are ill prepared for the various escapades, difficulties and vicissitudes that they encounter along the watery way. The adventures of these incompetent innocents abroad are magnified to epic proportions by the storyteller, J. His narration gives the book not only a wonderful endearing freshness but also a series of hilarious moments of timeless comedy.
Visa hela texten

There are a few seriously funny books that remain great for all time. Three Men in a Boat is one of these. -- Robert McCrum * Guardian * Ultimately, Three Men in a Boat is a study of friendship, human foibles and forgiveness. Returning to the book is like settling in for a fireside chat with an eccentric great-uncle who has seen it all, done it all, but who's still more ready to mock himself than others. -- Mark Mills * Independent *

Jerome Klapka Jerome was born in Walsall, Staffordshire, in 1859 but was brought up and educated in London. He started work as a railway clerk at fourteen, and later was employed as a schoolmaster, actor and journalist. He published two volumes of comic essays and in 1889 Three Men in a Boat. This was an instant success. His new-found wealth enabled him to become one of the founders of The Idler, a humorous magazine which published pieces by W. W. Jacobs, Bret Harte, Mark Twain and others. In 1900 he penned a sequel, The Men on a Bummel, which followed three protagonists on a walking tour through Germany. Jerome wrote a number of plays, the most famous being The Passing of the Third Floor Back, which is the morality tale set in a boarding-house where a charismatic Christ-like figure transforms the lives of its inhabitants. Jerome married in 1888 and had a daughter. He served as an ambulance driver on the Western Front in World War I and died in 1927.