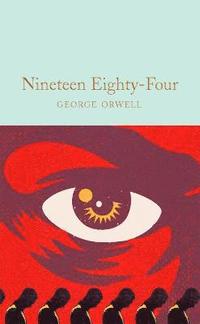 av George Orwell
Inbunden Engelska, 2021-01-07
120
Köp
Spara som favorit
Finns även som
Visa alla 2 format & utgåvor
George Orwell's Nineteen Eighty-Four is one of the most famous and influential novels of the 20th century. This terrifying dystopia, which he created in a time of great social and political unrest, remains acutely relevant and influential to this day. Part of the Macmillan Collector's Library; a series of stunning, clothbound, pocket-sized classics with gold foiled edges and ribbon markers. These beautiful books make perfect gifts or a treat for any book lover. This edition features an introduction by writer and journalist Dorian Lynskey. The year is 1984. The country is impoverished and permanently at war, people are watched day and night by Big Brother and their every action and thought is controlled by the Thought Police. Winston Smith works in the department of propaganda, where his job is to rewrite the past. Spurred by his longing to escape, Winston rebels. He breaks the law by falling in love with Julia, and, as part of the clandestine organization the Brotherhood, they attempt the unimaginable - to bring down the Party.
Visa hela texten

While it's tempting to hold the present moment up beside Orwell's Nineteen-Eighty Four, the book is more than a political totem, and overlooking its profound expressions of emotion robs it of most of its real power. * New Yorker * Probably the definitive novel of the 20th century, a story that remains eternally fresh and contemporary . . . Nineteen Eighty-Four has been translated into more than 65 languages and sold millions of copies worldwide, giving George Orwell a unique place in world literature. -- Robert McCrum * Guardian * It's almost impossible to talk about propaganda, surveillance, authoritarian politics, or perversions of truth without dropping a reference to 1984 . . . It is both a profound political essay and a shocking, heartbreaking work of art. And in the Trump era, it's a best seller. -- Atlantic * George Packer * Orwell effectively explores the themes of mass media control, government surveillance, totalitarianism and how a dictator can manipulate and control history, thoughts, and lives in such a way that no one can escape it . . . Orwell's novella is a warning for the human race. * Guardian * [1984] does what every novel in the genre should do - combining the illumination of an intriguing idea and the telling of a cracking story . . . The book succeeds because it is no manifesto, but an absorbing, deeply affecting story. * Independent * I read it and found myself absolutely astonished at what I read. -- Isaac Asimov 1984 is a political statement. It contains no prophetic declaration, only a simple warning to mankind . . . the warnings of George Orwell are more than ever relevant. * New York Times * Narrated with infinite precision, 1984 is one of the most famous dystopian satires in the English language . . . Winston Smith's quest for freedom under the gaze of all-seeing, all-knowing Big Brother still resonates strongly today, when privacy is hard to come by and governments adopt intrusive policies, supposedly to keep their citizens safe. * Common Sense Media * Nineteen Eighty-Four is a work of pure horror, and its horror is crushingly immediate. * New York Times (original review) *

Eric Arthur Blair (George Orwell) was born in 1903 in India, where his father was a civil servant. After studying at Eton, he served with the Indian Imperial Police in Burma for several years, and this inspired his first novel, Burmese Days. After two years in Paris, he returned to England to work as a teacher and then in a bookshop. In 1936 he travelled to Spain to fight for the Republicans in the Spanish Civil War, where he was badly wounded. During the Second World War he worked for the BBC. A prolific journalist and essayist, Orwell wrote some of the most influential books in English literature, including the dystopian Nineteen Eighty-Four and his political allegory Animal Farm. He died from tuberculosis in 1950.