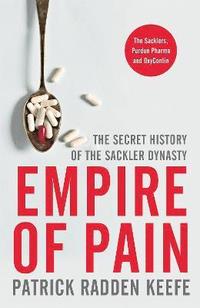 The Secret History of the Sackler Dynasty

av Patrick Radden Keefe
Inbunden Engelska, 2021-05-13
241
Köp
Spara som favorit
Finns även som
Visa alla 4 format & utgåvor
Winner of the 2021 Baillie Gifford Prize for Non-Fiction One of Barack Obama's Favorite Books of 2021 Goodreads Choice Awards 2021: Winner, Memoir & Autobiography Empire of Pain is the story of a dynasty: a parable of 21st century greed 'One of those authors I will always read, no matter what the subject matter, which is why I gobbled up Empire of Pain . . . a masterclass in compelling narrative nonfiction.' - Elizabeth Day, The Guardian '30 Best Summer Reads' 'If you haven't read it already, you really should. I've been thinking about it nonstop ever since I finished it.' - Malcolm Gladwell The gripping and shocking story of three generations of the Sackler family and their roles in the stories of Valium, Oxycontin and the opioid crisis. The Sackler family is one of the richest in the world, and their name adorns the walls of many famous institutions - Harvard; the Metropolitan Museum of Art; Oxford; the Louvre. The source of the family fortune was vague, until it emerged that the Sacklers were responsible for making and marketing Oxycontin, a blockbuster painkiller that was a catalyst for the opioid crisis - an international epidemic of drug addiction which has killed nearly half a million people. In this masterpiece of narrative reporting and writing, award-winning journalist and host of the Wind of Change podcast Patrick Radden Keefe exhaustively documents the jaw-dropping and ferociously compelling reality. Shortlisted for the 2021 Financial Times/McKinsey Business Book of the Year Award ________________________ Praise for Empire of Pain: 'More compelling, more character driven, and more capacious than any novel I have read this year.' - Sara Collins 'It's superbly written, exhaustively researched, full of fierce moral resolve, jaw-droppingly revealing, and above all propulsively readable. More than a match for any novel, and I think a future classic.' - Andrew Holgate, Literary Editor, The Sunday Times, chair of the Baillie Gifford judges, 2022 'Jaw-dropping . . . Beggars belief' - The Sunday Times 'You feel almost guilty for enjoying it so much' - The Times 'A page-turner with a villainous family to rival the Roys in Succession, and one where every chapter ends with the perfect bombshell' - Esquire 'This is unflinching reporting of a story that will grip and disturb you.' - Evening Standard 'A chilling and mesmerizing read, "substantially built on the family's own words". Which is what makes it so damning.' - The Observer 'He [Patrick Radden Keefe] adopts a calmly astonished tone as he tells a shocking story of callousness, cover-ups and monumental greed.' - The Guardian, Audiobook of the week 'Magnificent' - The Guardian 'Damning' - The Daily Mail 'A tour de force' - The Financial Times 'Superb' - The Spectator 'Excellent' - The Economist
Visa hela texten

A work of nonfiction that has the dramatic scope and moral power of a Victorian novel . . . A gripping tale of capitalism at its most innovative and ruthless that Keefe tells with a masterful grasp of the material. * Observer * There are so many "they did what?" moments in this book, when your jaw practically hits the page * Sunday Times * This is no dense medical tome, but a page-turner with a villainous family to rival the Roys in Succession, and one where every chapter ends with the perfect bombshell. * Esquire * The story of the Sacklers and OxyContin is a parable of the modern era of philanthropy being deployed to burnish the reputations of financiers and entrepreneurs . . . [A] tour-de-force * Financial Times * Put simply, this book will make your blood boil . . . a devastating portrait of a family consumed by greed and unwilling to take the slightest responsibility or show the least sympathy for what it wrought . . . a highly readable and disturbing narrative. -- John Carreyrou, author of <i>Bad Blood</i> * New York Times Book Review * An engrossing (and frequently enraging) tale of striving, secrecy and self-delusion . . . Even when detailing the most sordid episodes, Keefe's narrative voice is calm and admirably restrained, allowing his prodigious reporting to speak for itself. His portrait of the family is all the more damning for its stark lucidity. -- Jennifer Szalai * New York Times * A true tragedy in multiple acts. It is the story of a family that lost its moorings and its morals . . . Written with novelistic family-dynasty and family-dynamic sweep, Empire of Pain is a pharmaceutical Forsythe Saga, a book that in its way is addictive, with a page-turning forward momentum. -- David M. Shribman * Boston Globe * Explosive . . . Keefe marshals a large pile of evidence and deploys it with prosecutorial precision . . . Keefe is a gifted storyteller who excels at capturing personalities. * Washington Post * An air-tight indictment of the family behind the opioid crisis . . . [an] impressive expose -- Harriet Ryan * Los Angeles Times * A damning portrait of the Sacklers, the billionaire clan behind the OxyContin epidemic . . . [Keefe] has a knack for crafting lucid, readable descriptions of the sort of arcane business arrangements the Sacklers favored. -- Laura Miller * Slate * Keefe has a way of making the inaccessible incredibly digestible, of morphing complex stories into page-turning thrillers, and he's done it again with Empire of Pain . . . A scathing - but meticulously reported - takedown of the extended family behind OxyContin. It's equal parts juicy society gossip and historical record of how they built their dynasty and eventually pushed Oxy onto the market. -- Seija Rankin * Entertainment Weekly * He [Patrick Radden Keefe] adopts a calmly astonished tone as he tells a shocking story of callousness, cover-ups and monumental greed. * Guardian *

Patrick Radden Keefe is an award-winning staff writer at the New Yorker and the author of Say Nothing: A True Story of Murder and Memory in Northern Ireland, as well as two previous critically-acclaimed books, The Snakehead, and Chatter. He is the writer and host of the eight-part podcast "Wind of Change," on the origins of the Scorpions' power ballad. He is the recipient of the 2014 National Magazine Award for Feature Writing, was a finalist for the National Magazine Award for Reporting in 2015 and 2016, and also received a Guggenheim Fellowship. He grew up in Boston and now lives in New York.