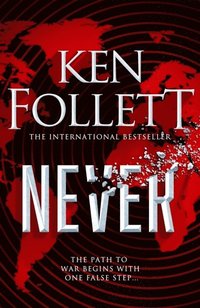 av Ken Follett
(1 röst)
Inbunden Engelska, 2021-11-09
212
Köp
Spara som favorit
Finns även som
Visa alla 8 format & utgåvor
The Sunday Times Thriller of the Month 'Stunning . . . one of the most compelling reads of the year' - Daily Express Expertly researched and visionary in scale, international number one bestseller Ken Follett's Never is more than a thriller. It imagines a scenario we all hope never comes true, one which will keep you transfixed until the final page . . . A stolen US army drone. A shrinking oasis in the Sahara Desert. A secret stash of deadly chemicals. Each is a threat to global stability. Each can be overcome with only the highest levels of diplomacy. But when those in charge disagree and refuse to back down, an international chain reaction kicks off with potentially catastrophic consequences: a world edging closer to war . . . Now three people must work with the utmost skill to stop that from happening: A spy working undercover with jihadis. A brilliant Chinese spymaster. A US president beleaguered by a populist rival for the next election. The only question is - in a game of brinksmanship, can the inevitable ever be stopped? 'Bold in scale and meticulously researched' - Sunday Times 'His best yet' - Stephen King Urgent and fiercely compelling' - The Washington Post More than 175 million copies sold worldwide. Published in over 80 territories and 37 languages. The international no.1 bestselling phenomenon returns.
Visa hela texten

An ambitious and compelling narrative, exploring the consequences of international power plays and the chilling imminence of global catastrophe -- <i>Press Association</i> syndicated review Ken Follett has never been short of ambition. And it's the global scope and vast multinational cast that chiefly impress in Never, his return to contemporary storytelling . . . Bold in scale and meticulously researched, Never makes other international spy novels appear timid, lazy and parochial -- <i>Sunday Times</i> Thriller of the Month November 2021 I couldn't put it down . . . terrifying read . . . masterful detail . . . It's a stunning thriller and one of the most compelling reads of the year. It's not quite The Godfather, but it comes pretty close -- <i>Daily Express</i> Urgent and fiercely compelling . . . Never is first-rate entertainment that has something important to say. It deserves the popular success it will almost certainly achieve -- <i>Washington Post</i> Superstar novelist Ken Follett's what-if political thriller . . . is so exciting - and so plausible - you won't want to look away -- Apple Books Best Book of the Month Settle in for a thrilling ride -- <i>CNN.com</i> Follett's story captivates -- <i>Christian Science Monitor</i> A complex, scary thriller that feels too plausible for comfort. You'll be so absorbed in the story threads that you'll follow them anywhere - and you'll suddenly realize you've read hundreds of pages . . . On one level, it's great entertainment; on another, a window into a sobering possibility -- <i>Kirkus Reviews</i> starred review Absolutely compelling . . . A smart, scary, and all-too-plausible thriller -- <i>Booklist</i> Terrific . . . A powerful, commanding performance from one of the top writers in the genre -- <i>Publishers Weekly</i> starred review [Follett] weaves a web of intrigue . . . Shocking to the very last page * Sunday Express * A master storyteller, Follett has created a tale vast in scale, yet richly detailed, exploring the consequences of international power plays and the chilling imminence of global catastrophe. * The i * Taking readers on a thrilling, rollercoaster ride through 800 pages of dazzling storytelling, Follett brings his extraordinary visionary talents to this powerful and far-reaching novel. * Lancashire Evening Post * A pacey, character-driven thriller set against the backdrop of an imminent Third World War * Choice Magazine *

Ken Follett was born in Cardiff, Wales. Barred from watching films and television by his parents, he developed an early interest in reading thanks to a local library. After studying philosophy at University College London, he became involved in centre-left politics, entering into journalism soon after. His first thriller, the wartime spy drama Eye of the Needle, became an international bestseller and has sold over 10 million copies. He then astonished everyone with his first historical novel, The Pillars of the Earth, the story of the building of a medieval cathedral, which went on to become one of the most beloved books of the twentieth century. Now he springs another surprise with Never. One of the most popular authors in the world, his many books, including the Kingsbridge series and the Century trilogy, have sold more than 178 million copies. A father and husband, Ken lives with his wife in England and enjoys travelling the world when he can.