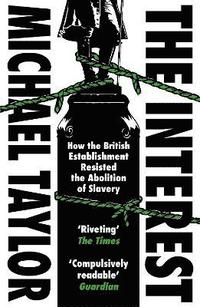 How the British Establishment Resisted the Abolition of Slavery

av Michael Taylor
Häftad Engelska, 2021-09-02
117
Köp
Spara som favorit
SHORTLISTED FOR THE ORWELL PRIZE FOR POLITICAL WRITING A DAILY TELEGRAPH BOOK OF THE YEAR A riveting narrative history that shows for the first time how the campaign to end slavery divided Britain, convulsed its politics and was almost thwarted by some of the most powerful and famous figures of the era. In 1807, Parliament outlawed the slave trade in the British Empire. But for the next 25 years more than 700,000 people remained enslaved, due to the immensely powerful pro-slavery group the 'West India Interest'. This ground-breaking history discloses the extent to which the 'Interest' were supported by nearly every figure of the British establishment - fighting, not to abolish slavery, but to maintain it for profit. Gripping and unflinching, The Interest is the long-overdue expose of one of Britain's darkest, most turbulent times. 'A critical piece of history and a devastating expose' Shashi Tharoor, author of Inglorious Empire 'Thoroughly researched and potent' David Lammy MP 'Essential reading' Simon Sebag Montefiore
Visa hela texten

An outstanding and gripping revelation ... essential reading -- Simon Sebag Montefiore Impressively researched and engagingly written -- Dominic Sandbrook * Sunday Times * A magnificent book ... riveting -- Ian Thomson * Evening Standard * Powerful ... engrossing ... Taylor's potent book shows why slavery took root as an essential part of British national life -- Martin Chilton * Independent * Taylor can tell a story superbly and has a fine eye for detail ... His argument is a potent and necessary corrective to a cosy national myth * Economist * Michael Taylor's well-researched The Interest is ... about abolition, but it focuses on the grandees who fought against it, mostly for reasons of greed ... those seeking a catalogue of the country's old iniquities need look no further -- Simon Heffer * Telegraph Books of the Year * A thoroughly researched and potent historical account, The Interest exposes the truth behind the longstanding narrative of Britain as a leading abolitionist force and makes a powerful case for reparations -- Rt Hon David Lammy MP, Shadow Secretary of State for Justice Scintillating ... In twenty brisk, gripping chapters, Taylor charts the course from the foundation of the Anti-Slavery Society in 1823 to the final passage of the Slavery Abolition Act in 1833. Part of what makes this a compulsively readable book is his skill in cross-cutting between three groups of protagonists. On one track, we follow the abolitionist campaigners on their lengthy, uphill battle ... This well-known story is reanimated by some brilliant pen-portraits ... A second strand illuminates the fears and bigotries of white British West Indians ... The main focus of the book, however, is on the colonists' powerful domestic allies, the so-called West India Interest ... Taylor paints a vivid picture of their outlook, organisation and superior political connections ... As this timely, sobering book reminds us, British abolition cannot be celebrated as an inevitable or precocious national triumph. It was not the end, but only the beginning -- Fara Dabhoiwala * Guardian * One achievement of Taylor's fascinating book is that, for the first time in a book about abolition, it gives equal weight to the force of pro-slavery ... Taylor's political analysis is first-rate and riveting ... He argues that emancipation was neither inevitable nor altruistic; party politics in Westminster and rebellion from the West Indies played as much a role as moral outrage. Taylor's achievement [is to] show that, thanks to the power of the Interest, being pro-slavery was seen as a respectable, even popular, position in British politics until the day of its demise. Above all, he reminds us of the role of those who have been unsung in this story - of Mary Prince, Samuel Sharpe and Quamina -- Ben Wilson * The Times * Taylor superbly brings to life all the intrigue, machinations, heavy-lifting, rigmarole and chance of the tortuous path to abolition -- H Kumarasingham * Literary Review * Impressive ... Taylor tells a compelling story, graced with anecdotes but driven by argument, that moves the reader to and fro between London and the Caribbean, and between aristocratic houses and anti-slavery rallies ... with fierce moral passion ... Taylor vividly evokes the slave revolts ... reveals some of the atrocities perpetrated by slave-owners ... Yet the book's primary focus is political because, as Taylor emphasises, the abolition of slavery turned to a large extent on events at Westminster ... Yet votes were not enough; bribery was also vital ... The writing of British history must encompass slave-power, not just sea-power - as Taylor's scorching book makes clear -- David Reynolds * New Statesman * Skilfully written with a powerful and passionate narrative, this is a seminal work that carries the burden of phenomenal relevance. It shows how the enslavers' battle to protect their trophy became the most dramatic public affair in early 19th century Britain -- Sir Hilary Beckles,

Michael Taylor is the author of The Interest: How the British Establishment Resisted the Abolition of Slavery, which was shortlisted for the Orwell Prize 2021, chosen as a Daily Telegraph Book of the Year and described as 'riveting' (The Times) and 'compulsively readable' (Guardian). He graduated with a double first in history from the University of Cambridge, where he earned his PhD, and has since been Lecturer in Modern British History at Balliol College, Oxford, and a Visiting Fellow at the British Library's Eccles Centre for American Studies.