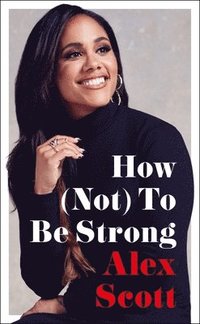 How (Not) To Be Strong

av Alex Scott
Inbunden Engelska, 2022-09-29
208
Köp
Spara som favorit
Kan tyvärr inte levereras innan julafton.
Finns även som
Visa alla 3 format & utgåvor
'An inspiration' - Taylor Swift 'I was incredibly moved by Alex's story and her bravery is second to none' - Steven Bartlett, entrepreneur and host of 'The Diary of a CEO' LIONESS. BROADCASTER. SURVIVOR. An inspirational memoir of finding strength and resilience from the former Arsenal captain and England Lioness. From the football cages of East London to broadcasting to millions, the engine powering Alex Scott's remarkable journey has always been her resilience. But thanks to a 'push-through mentality' the world has only ever seen the 'strong' side of Alex Scott. Now the former Lioness is ready to lower the shield. In How (Not) to Be Strong, Alex shares the inspiring lessons that have shaped her, from finally confronting the legacy of a tumultuous childhood to the tarnished truth behind the gleaming football trophies. With raw honesty, Alex shows how she's tackled life's challenges and that sometimes the strongest thing you can do is show your most vulnerable side to the world. 'A real story of growth' HOLLY WILLOUGHBY 'An amazing read. What a book' ALEX JONES
Visa hela texten

An inspiration -- Taylor Swift I was incredibly moved by Alex's story and her bravery is second to none -- Steven Bartlett, entrepreneur and host of 'The Diary of a CEO An amazing read. What a book. -- Alex Jones * One Show * A real story of growth -- Holly Willoughby * This Morning * Such a powerful and raw story, honestly told -- Wes Streeting MP

Alex Scott MBE is an award-winning broadcaster and former professional footballer. She helped Arsenal in their historic 'quadruple' season, in which they won all of their trophy competitions, and was later appointed as the team's captain. She represented England in 140 appearances with the Lionesses, retiring as the second most-capped England player across the men's and women's game. Alex is one of the UK's most in-demand presenters, appearing on The One Show, Children in Need, Sport Relief and ITV's The Games. In 2021, she made history as the first permanent female host of BBC's Football Focus. She is an ambassador for the BBC's mental health platform, Headspace, and holds honorary doctorates from the University of East London and University of Hertfordshire.