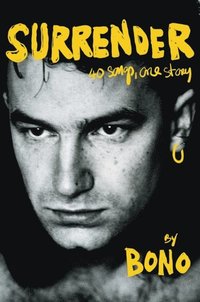 av Bono
Inbunden Engelska, 2022-11-01
249
Köp
Spara som favorit
Finns även som
Visa alla 2 format & utgåvor
'A brilliant, very funny, very revealing autobiography-through-music. Maybe the best book ever written about being a rockstar' CAITLIN MORAN _______________________________________________________________ Bono - artist, activist and the lead singer of Irish rock band U2 - has written his autobiography: honest and irreverent, intimate and profound, Surrender is the story of the remarkable life he's lived, the challenges he's faced and the friends and family who have shaped and sustained him. 'When I started to write this book I was hoping to draw in detail what I'd previously only sketched in songs. The people, places, and possibilities in my life. Surrender is a word freighted with meaning for me. Growing up in Ireland in the seventies with my fists up (musically speaking), it was not a natural concept. A word I only circled until I gathered my thoughts for the book. I am still grappling with this most humbling of commands. In the band, in my marriage, in my faith, in my life as an activist. Surrender is the story of one pilgrim's lack of progress ... With a fair amount of fun along the way.' - Bono As one of the music world's most iconic artists and the cofounder of organizations ONE and (RED), Bono's career has been written about extensively. But in Surrender, Bono's autobiography, he picks up the pen, writing for the first time about his remarkable life and those he has shared it with. In his unique voice, Bono takes us from his early days growing up in Dublin, including the sudden loss of his mother when he was 14, to U2's unlikely journey to become one of the world's most influential rock bands, to his more than 20 years of activism dedicated to the fight against AIDS and extreme poverty. Writing with candour, self-reflection, and humour, Bono opens the aperture on his life - and the family, friends and faith that have sustained, challenged and shaped him. Surrender's subtitle, "40 Songs, One Story," is a nod to the book's 40 chapters, which are each named after a U2 song. Bono has also created 40 original drawings for Surrender which will appear throughout the book.
Visa hela texten

This is Bono at his best: thoughtful, reflective, revealing a wisdom that his rock-star persona covers up ... At the root of it all you don't doubt his decency or integrity -- Will Hodgkinson * The Times * A rattling good yarn ... characteristically expansive, but it whizzes by ... Bono has storytelling verve and a genuine desire for self-examination and is enthusiastic about praising others, often at his own expense. ... [a] generous, energetic book -- Dorian Lynskey * Guardian * Bono's memoir bares his soul ... Has any rock superstar written a more revealing biography? He deftly balances the comical and profound and packs anecdotes with cameos by the rich and famous, from Frank Sinatra to Pope John Paul II -- Neil McCormick * Telegraph * Beautifully evoked, a mixture of Joycean exuberance and Chandleresque irony ... most revealing are the intimate personal experiences that shaped him and his chaotic creative process. Punctuating it all is the music. Each chapter uses a U2 song to pull us down memory lane -- Mariella Frostrup * Sunday Times * A rewarding read about a loss-fuelled life lived to the full ... What makes much of this book so exciting and interesting, is that the sadness is overwhelmed by a desperate, frenzied desire to use life more richly since it has proved to be so fragile. Sadness is replaced here by an extraordinary and breathless zeal for friendship but also for love ... Surrender is, in its own generous way, a book written by an Irishman to tell his mother how much he misses her, to tell his mates how much he rates them, and to let his wife and children know how much he loves them -- Colm Toibin * Irish Times * Bono's honesty will win over his harshest critics ... the U2 frontman's memoir is a trumph ... Honest, witty, informative and beautifully written. Surrender will surely join the ranks of the great rock memoirs * Irish Independent * Bono's prose is electrifyingly good. Not confected memories, but the messy, sometimes bathetic minutiae of lived experience, emotions remembered but only truly understood with hindsight and vocabulary that comes much later -- Pete Paphides, author of 'Broken Greek' Will engage and entertain you, full of extraordinary anecdotes and people from Sinatra and Johnny Cash to Pope Benedict and presidents. -- Catherine Meyer, author and founder of WEP Bono's book is absolutely brilliant -- Simon Schama A brilliant, very funny, very revealing, autobiography-through-music. Maybe the best book ever written about being a rockstar -- Caitlin Moran

The lead singer of U2, Bono was born Paul David Hewson in Dublin. He met The Edge, Larry Mullen and Adam Clayton at school and in 1978, U2 was formed. The band released their first album, "Boy," on Island Records in 1980 and to date have released a total of 14 studio albums that have sold 157 million copies worldwide. Heralded by Rolling Stone as "a live act simply without peer," the band's record-breaking 360 Degrees Tour (2009-2011) remains the highest-grossing concert band tour of all time. U2 have won numerous awards, including 22 Grammys, more than any other duo or group, as well as an Academy Award nomination and the Amnesty International Ambassador of Conscience Award. In 2005, U2 was inducted into the Rock n' Roll Hall of Fame. Alongside his role in U2, Bono is a ground-breaking activist. A leader in Jubilee 2000's Drop the Debt campaign, he next took on the fight against HIV/AIDS and extreme poverty, co-founding sister organizations ONE and (RED). ONE is a movement of millions of people dedicated to the fight against extreme poverty and preventable disease. With ONE, Bono has lobbied heads of state and legislatures all around the world, helping to ensure the passage of programs, such as the U.S. PEPFAR AIDS program, that have helped to save tens of millions of lives over the past 20 years. (RED) - which partners with companies to raise public awareness about, and corporate contributions for, the AIDS crisis - has to date generated more than $700 million for the Global Fund to treat and prevent AIDS in Africa. Since 2020, ONE and (RED) have also been fighting COVID-19 and its impact on the developing world. In 2016, Bono cofounded The Rise Fund, a global impact fund investing in entrepreneurial companies driving positive social and environmental change in alignment with the Sustainable Development Goals. Bono has received a number of awards for his music and activism, including the Freedom of the City of Dublin (with U2), Chile's Pablo Neruda Medal of Honour, the Legion D'Honneur from the French Government, an honorary British knighthood, the Fulbright Association Prize for International Understanding and TIME Magazine's Person of the Year (along with Bill and Melinda Gates). He lives in Dublin with his wife Ali Hewson.