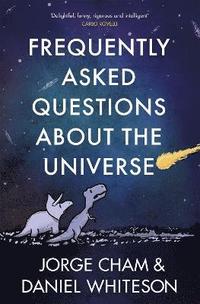 Frequently Asked Questions About the Universe

av Daniel Whiteson, Jorge Cham
Inbunden Engelska, 2021-10-28
204
Bevaka
Spara som favorit
Tillfälligt slut – klicka "Bevaka" för att få ett mejl så fort boken går att köpa igen.
Finns även som
Visa alla 6 format & utgåvor
You've got questions: about space, time, gravity, and the odds of meeting your older self inside a wormhole. All the answers you need are right here. As a species, we may not agree on much, but one thing brings us all together: a need to know. We all wonder, and deep down we all have the same big questions. Why can't I travel back in time? Where did the universe come from? What's inside a black hole? Can I rearrange the particles in my cat and turn it into a dog? Physics professor Daniel Whiteson and researcher-turned-cartoonist Jorge Cham are experts at explaining science in ways we can all understand, in their books and on their popular podcast, Daniel and Jorge Explain the Universe. With their signature blend of humour and oh-now-I-get-it clarity, Jorge and Daniel offer short, accessible, and lighthearted answers to some of the most common, most outrageous, and most profound questions about the universe they've been asked. This witty, entertaining, and fully illustrated book is an essential troubleshooting guide for the perplexing aspects of reality, big and small, from the invisible particles that make up your body to the identical version of you currently reading this exact sentence in the corner of some other galaxy. If the universe came with an FAQ, this would be it.
Visa hela texten

Delightful, funny, and yet rigorous and intelligent: only Jorge and Daniel can reach this exquisite balance -- CARLO ROVELLI, author of Seven Brief Lessons on Physics and Helgoland

Jorge Cham is the cartoonist behind the popular online comic 'Piled Higher and Deeper' (a.k.a. PHD Comics). He holds a PhD in robotics from Stanford University and is a former instructor and research associate at Caltech. Daniel Whiteson is a Professor of Physics and Astronomy at the University of California, Irvine, and a fellow of the American Physical Society. He earned his PhD in physics from the University of California at Berkeley and is an active researcher, using the Large Hadron Collider at CERN to search for exotic new particles. Together they are the co-authors of We Have No Idea, co-hosts of the podcast Daniel and Jorge Explain the Universe, and co-creators of the animated PBS series Elinor Wonders Why.