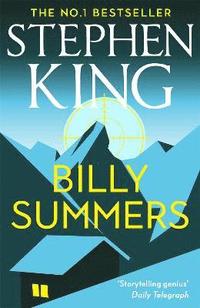 The No. 1 Sunday Times Bestseller

av Stephen King
Häftad Engelska, 2022-06-09
116
Köp
Spara som favorit
Kan levereras innan julafton!
Finns även som
Visa alla 2 format & utgåvor
The perfect crime doesn't exist. The perfect getaway . . . that's another story. Billy Summers is a killer for hire. He's among the best snipers in the world, a decorated Iraq war vet who can blend into any neighbourhood and disappear after the shot is taken. But he'll only agree to a contract if the target is a truly bad guy. Now Billy wants out. But first he's offered one final job - an offer which is just too big to refuse. As the days count down to the hit, Billy senses something is wrong. He doesn't yet know just how wrong, or about the woman who will help him try to set things right. Part thriller, part war story, part lyrical portrait of small-town America, Billy Summers is about a good man in a bad job, with one last shot at redemption 'A compelling and engrossing read' - Sunday Express 'Adventurously shape-shifting yet always disciplined . . . dazzling' - The Sunday Times
Visa hela texten

A dazzlingly shapeshifting novel that, like its antihero, only pretends to be easy to pigeonhole. Disciplined but adventurous, equally good at action scenes and in-depth psychology * The Sunday Times * A thriller with a surprisingly heartfelt and redemptive ending, Billy Summers is a compelling and engrossing read * Sunday Express * King's killer instinct hits the mark again... Without abandoning his blood-chilling propensities, he has transformed himself into one of the most adroit and accomplished crime writers in the US. King has negotiated the shifting of gears with the kind of panache that befits the "ultimate storyteller" (for once, publisher hyperbole is justified). * The I * His best book in years . . . He may always be considered a horror novelist, but King is doing the best work of his later career when the ghosts are packed away and the monsters are all too human * Guardian * Storytelling genius * Telegraph * Adventurously shape-shifting yet always disciplined, it's a dazzling return to form * The Sunday Times * Devoured it ... it's such a page-turner -- Martin Clunes * Radio Times * It's a novel with a heart-stopping, heartfelt conclusion * Daily Express, Books of the Year * Stephen King is primarily known as a master of horror, but at heart he is a hardcore thriller writer * Irish Independent, Books of the Year * A cracking noir * RTE Guide, Books of the Year * A brilliantly enjoyable novel with a thrilling conclusion * Irish Times, Books of the Year * Stephen King combines a story of corruption in high places with a lyrical portrait of small-town life and a bittersweet love story * Daily Mail * Disciplined but adventurous, equally good at action scenes and psychology, King shows with this novel that, at 74, he's . . . at the top of his game * The Sunday Times * [An] excellent crime caper * Irish Times *

STEPHEN KING is the author of more than seventy books, all worldwide bestsellers. His recent titles include The Institute, which was described by the Sunday Express as a 'masterpiece', The Outsider (voted winner of the Goodreads Choice Award for best Mystery and Thriller 2018), and If It Bleeds (a Sunday Times No. 1 bestseller). Many of his titles have been turned into celebrated films, TV series and streamed events including IT, 'a book which speaks to everybody' (Guardian), The Shawshank Redemption and Stand By Me. King is the recipient of the 2020 Audio Publishers Association LIfetime achievement Award, the 2018 PEN America Literary Service Award, the 2014 National Medal of Arts and the 2003 National Book Foundation Medal for Distinguished Contribution to American Letters. In 2007 he also won the Grand Master Award from the Mystery Writers of America. He lives with his wife Tabitha King in Maine.