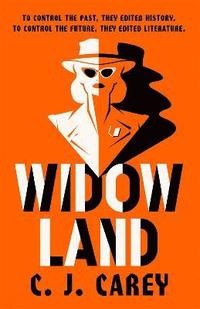 av C J Carey
Inbunden Engelska, 2021-06-10
180
Köp
Spara som favorit
Finns även som
Visa alla 4 format & utgåvor
'READING THIS TERRIFIC, ORWELLIAN NOVEL YOU ALMOST HOLD YOUR BREATH' Bel Mooney An alternative history with a strong feminist twist, perfect for fans of Robert Harris' Fatherland, Christina Dalcher's Vox and the dystopian novels of Margaret Atwood. 'A TRIUMPH' Amanda Craig 'CONVINCING AND GRIPPING' Elizabeth Buchan 'BRILLIANTLY IMAGINED' Clare Chambers 'TERRIFIC HEROINE' Adele Geras 'VIVIDLY IMAGINED' Nicci French To control the past, they edited history. To control the future, they edited literature. London, 1953, Coronation year - but not the Coronation of Elizabeth II. Thirteen years have passed since a Grand Alliance between Great Britain and Germany was formalized. George VI and his family have been murdered and Edward VIII rules as King. Yet, in practice, all power is vested in Alfred Rosenberg, Britain's Protector. The role and status of women is Rosenberg's particular interest. Rose Ransom belongs to the elite caste of women and works at the Ministry of Culture, rewriting literature to correct the views of the past. But now she has been given a special task. Outbreaks of insurgency have been seen across the country; graffiti daubed on public buildings. Disturbingly, the graffiti is made up of lines from forbidden works, subversive words from the voices of women. Suspicion has fallen on Widowland, the run-down slums where childless women over fifty have been banished. These women are known to be mutinous, for they have nothing to lose. Before the Leader arrives for the Coronation ceremony of King Edward and Queen Wallis, Rose must infiltrate Widowland to find the source of this rebellion and ensure that it is quashed. 'THE MOST IMPORTANT FEMINIST NOVEL IN DECADES' Jane Harris 'A VERY SMART REIMAGINED HISTORY' Henry Porter 'BRIMMING WITH CRACKLING DETAIL, A GRIPPING THRILLER' Miranda Carter
Visa hela texten

Clever and steeped in historical insight * The Times, book of the month * For fans of dystopian stories (think Margaret Atwood and Naomi Alderman) this one's a must-read * Cosmopolitan * Revelatory page-turning reading * Observer * Powerfully imagined * Sunday Times * A richly imagined treat * Independent * Scary, pacy and packed with period detail, Widowland is a smart, inventive imagining of what might have been * Daily Mail * An absorbing, Orwellian dystopia that makes a good case for the subversive power of literature * Guardian * Austere and low-key, Widowland succeeds when it comes to evoking the drab atmosphere of an occupied nation * Financial Times * Hugely atmospheric, rich in the way it evokes an austerity Britain that's both familiar and, because of the possibility of a grim fate for saying or doing the wrong thing, chilling * SFX * Carey's meticulously-constructed alternative Britain in the 1950s is a huge imaginative feat * Independent * Chilling and challenging in equal measure * Woman & Home * A "what if?" dystopian novel which will send shivers down your spine * Red * A heady mixture: part romantic thriller, partly a book about the power of literature, an alternative history and, overall, a chilling piece of dystopian fiction * SHOTS * The power of words is at the heart of this terrific and sometimes terrifying novel * Sci Fi Bulletin * Astonishing * Perspective * Widowland is a cut above the rest -- Sam Baker * Noon Bookclub * Reading this terrific, Orwellian novel you almost hold your breath, so vivid is Carey's evocation of a dystopia which (you reflect) was surely just a hairsbreadth away. The engaging heroine, vivid scenario and enthralling plot are underpinned by a serious political sensibility - one which turns an accomplished thriller into a warning. -- Bel Mooney Widowland is a triumph. One of the best counter-factual dystopias ever written about what a Nazi Britain might be like, it not only equals Fatherland and The Handmaid's Tale but, by placing literary heroines at its heart, supersedes them. As witty as it is withering, as thrilling as it is consummately imagined, this deserves to be the bestseller of 2021 -- Amanda Craig A brilliantly convincing and gripping dystopian vision. Fantastically detailed and assured, I read it with huge admiration for having pulled off such a terrific novel -- Elizabeth Buchan Clever, gripping and brilliantly imagined - a brave, bookish heroine takes on the forces of a chillingly convincing post-war dystopia -- Clare Chambers Widowland is a very smart reimagined history executed with plenty of wit, energy and originality plus there's a rather subtle message for today. Excellent! -- Henry Porter Widowland is a fully-realised 1950s dystopia brimming with crackling detail, a gripping thriller and, at a moment when we're having to face our own Imperial past, a slyly vivid account of living under a colonial power -- Miranda Carter A terrifying, vividly imagined story of a Nazi Britain that might have been. Tense, utterly convincing and, in the end, very moving -- Nicci French Widowland is not just a page-turning thriller and masterful work of suspense. This book is also the most important feminist novel to be published in decades because it speaks as much about contemporary tyranny and misogyny as it does about the re-imagined past that Carey has so skilfully created -- Jane Harris All Jane Thynne fans should read her alter ego C J Carey whose Widowland is fabulous! A very stylish and exciting counterfactual set around the coronation of Edward VIII and Mrs Simpson. Hitler is still alive and in charge. Rose is a terrific heroine -- Adele Geras I am in awe at the author's imagination, her ability to conjure and so cleverly convey an entire world - it manages to feel both chillingly dystopian and utterly realistic. I love the details of the office, and Rose's flat, and her bus rides, but most of all I loved the description of the Oxford Widowlands, and the w

C. J. Carey is a novelist, journalist and broadcaster. She has worked at the Sunday Times, the Daily Telegraph and the BBC, among others. She also writes novels under the name Jane Thynne and lives in London. Widowland is the first novel she has written as C. J. Carey.