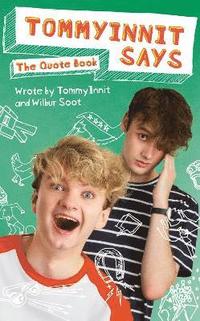 av Tom Simons, Will Gold
Inbunden Engelska, 2022-10-13
166
Köp
Spara som favorit
Finns även som
Visa alla 1 format & utgåvor
A laugh-out-loud 'best of' selection of TommyInnit's most weird and wonderful quotes - plus much more - carefully selected to BLOW YOUR MIND by him and best friend Wilbur Soot. 'Nah, I think I'd be a pretty bad shark' 'What if God was just legs?' 'We're really just chilling, fellas' Born sometime in the early 2000s, TommyInnit's first job was a YouTuber. No, really, we're not joking, the very first job he had was a YouTuber. For the last three years, he's been mouthing off on the internet to anyone who will listen. So far, that's over 40 million followers. Will there ever be an end to TommyInnit's rampant flurry of success? Probably. And Wilbur Soot has been right by his side. Wilbur first started his career as a young man staring at the wall until he also became a YouTuber. He also discovered a little activity some may call 'singing'. In The Quote Book, TommyInnit covers a wealth of topics from cars-that-grow-teeth to slime people, and from things that be crazy to octopi. Curated and edited by Wilbur Soot, TommyInnit is about to change your life one word at a time. Unless, dear reader, you read two words at a time, like he does. Featuring: A day in the life Inside TommyInnit's brain What TommyInnit would do if he was God Life advice from Wilbur Love poetry and history lessons, TommyInnit style Wilbur's attempts to reason with TommyInnit
Visa hela texten

Tom Simons aka TommyInnit is one of the world's biggest streamers, gaming YouTubers and content creators. At 18 years old he has over 40 million followers across all of his social platforms. He is popularly known for posting live streams and Minecraft-related videos on his YouTube channel. Will Gold aka Wilbur Soot is a streamer and musician. Known for his work as a writer on the Dream SMP (one of the most popular web series of all time), Wilbur has also appeared eight times on the UK music charts, peaking at number 5. He has also featured in Billboard's emerging artists chart and Rolling Stone's top breakthrough artists.