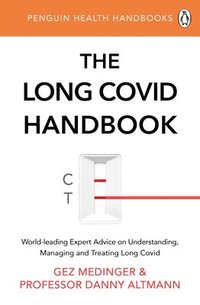 av Gez Medinger, Professor Danny Altmann
Häftad Engelska, 2022-10-20
163
Köp
Spara som favorit
Finns även som
Visa alla 2 format & utgåvor
Understand, manage, and treat Long Covid. Reports suggest that over 100m people around the world are living with Long Covid (more than 1.5m in the UK) yet reliable, clear information and guidance remains scarce. This book is the definitive guide to understanding, managing and treating the condition. Written by the world's leading immunologist Professor Danny Altmann and expert patient Gez Medinger, The Long Covid Handbook translates cutting-edge science, patient-led research and practical guidance with clarity. This book will equip you with expert information and advice on: - Long Covid's 200 symptoms, which include fatigue, brain fog, breathlessness and more - Tips for recovery - Which treatments are most effective and why - Who is most susceptible to the condition and why - What we can learn about Long Covid from other chronic illnesses - The impact on mental health This is the essential guide for anyone living with the condition, as well as clinicians seeking to better understand this little-understood illness.
Visa hela texten

Gez Medinger (Author) Gez Medinger is an investigative science journalist and patient advocate for Long Covid. He was a film-maker and marathon runner when he became ill with Covid in the early days of the pandemic. When he didn't recover, Gez put his efforts into researching the novel condition of Long Covid, interviewing some of the world's leading clinicians and turning his YouTube channel into a huge resource for patients, conducting over a dozen patient led studies - which have been quoted in global press including New York Times, New Scientist and Men's Health. In the process he has built a worldwide community and his films currently have over 5 million views. Danny Altmann (Author) Dr Danny Altmann is a Professor of Immunology at Imperial College London. His key research interests are the immunology of infectious disease including severe bacterial infections, Zika virus, Chikungunya virus and SARS-CoV-2. He has also worked on autoimmune diseases including multiple sclerosis and rheumatoid arthritis. During the Covid-19 pandemic he has acted in several advisory roles, including the House of Commons and House of Lords Science Committees and the Immunology Task Force to the Scientific Advisory Group for Emergencies (SAGE). He spent some years working as lead on strategy in Infection, Immunity and Population Health at the Wellcome Trust, and has served more than 20-years as Editor at medical journals including Immunology.