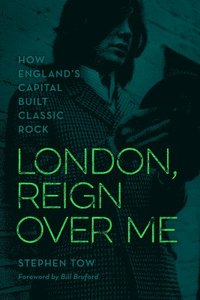 London, Reign Over Me

This vibrant pop history makes a strong case for London being the true birthplace of modern rock. . . The book moves at rocket speed as it describes how the music pivoted and grew . . . What results is a passionate study of a unique moment in rock history. * Publishers Weekly * Tow does a wonderful job of exploring American blues as a jumping off point for much of the London-based music. In the 1960s, London brought the world The Beatles, the Yardbirds, the Animals, the Who, the Small Faces, the Kinks, the Zombies, Deep Purple, the Rolling Stones, Pink Floyd, and Led Zeppelin, among others . . . Tow's knowledge and expertise coupled with extensive interviews elevate this book above the crowd. * CHOICE * [Tow] lays out just how British musicians of the 1960s discovered, internalized, covered, and then built upon the music of American blues musicians * Booklist * Rather than regurgitating the research of others, [Tow] draws from many interviews with key musicians including artists Ian Anderson (Jethro Tull), Rod Argent (the Zombies), and JimMcCarty (the Yardbirds), as well as from memoirs and biographies. His writing is immediate and clearly paints a picture of 1960s London. VERDICT Covering dozens of bands in a variety of styles, Tow pens a sweeping look at a pivotal period of music history. * Library Journal * Tow has paired contemporary observations with direct recollections from over ninety musicians who helped foment the scene. Tow does an admirable job pulling apart the many threads that created a musical renaissance the likes of which have not been heard before or since . . . Tow has assembled a great blend of then-contemporary observations with latter day perspectives from those who were there in this delightful and edifying book. * Entertainment Today * An extensively-researched, historically-accurate, and uniquely British account of all the factors and circumstances that contributed to make London the ideal birthplace for classic rock during the post-war boom. . . . Tow has really done his homework on this one - the book is strewn with vivid imagery, many hilarious, interesting anecdotes, and numerous artist interviews. . . . Classic rock was, almost out of necessity, a new sound from a new generation, and Tow's book passionately explores how this music helped catalyze one of the most important cultural transformations of the 20th century. * Media Entertainment Arts Worldwide * [Tow]'s lyrical style keeps the history moving forward and accentuates the music so eloquently you can almost hear the opening chords of some of your favorite songs. . . London, Reign Over Me hits the high notes of a decade of brilliant music in fine fashion. It's more than a simple history, it's a snapshot of one of culture's most monumental - and fleeting - moments, told by the artists' who lived it and the people who listened. * The Model American * . . . a colourfully flavoured look at 60s pop and rock in the UK written by a specialist . * The Beat (UK) * Tow's picture of the British music scene from the early 1960s to 1969 is easy to digest, leaving the reader wanting more . . . an excellent study. * Listen Iowa * [Tow] takes readers on a fascinating, astute, and welcoming tour through the birth of the several genre offshoots-such as progressive rock and folk-to explore the remarkable circumstances that made London and its surroundings such a fertile and significant creative space. One of the strengths of this book is the inclusion of insights from important musicians, managers, producers, critics, and others of the time. . . London, Reign Over Me is a masterfully researched, spacious, and inviting survey of British rock music in the 1960s. * Popmatters * Stephen Tow is very insightful in his descriptions and historically on the button. He is an inspiring documenter of the period. Well done. -- Dave Davies, The Kinks Through its clarity and apposite interviews, Tow's recreation of London's musical growth from the fifties onwards gives you a

Stephen Tow teaches history at Delaware Valley University, specializing in rock n roll and twentieth-century America. He is the author of The Strangest Tribe: How a Group of Seattle Rock Bands Invented Grunge and resides near Philadelphia with his wife, daughter, and two dogs.

Foreword by Bill Bruford Introduction Chapter 1: Out of the Grey, Into the Blues Chapter 2: R&B Boom! Chapter 3: It Was Just Bloody Wednesday Chapter 4: Discovering Prog Rock Chapter 5: You Can All Join In (Progressive Folk) Chapter 6: Blues Revisited Epilogue